2023: Primate Ayodele reveals those who can succeed Buhari 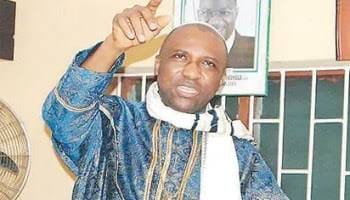 Founder and spiritual leader of the Inri Evangelical Spiritual Church, Oke-Afa, Lagos, Primate Babatunde Ayodele Elijah has revealed prominent Nigerians who may succeed President Mohammadu Buhari if fielded by their respective political parties. Primate Ayodele who said the People’s Democratic Party (PDP) has brighter chance of wresting power from the incumbent President, advised the opposition to promptly put his house in order in preparation for 2023. He gave the names of its prominent members who can win the 2023 presidential poll, saying: “
If PDP wants to win, these are the names of people that can give them victory in 2023 – Bukola Saraki, Aminu Tambuwal, Kwankwanso. PDP don’t regard rotation, there’s nothing like rotation in PDP.

People who can become President and Vice President in PDP – Wike, Sam Ortom, Kwakawanso, Bala Mohammad, Makinde, These are the people that can fly with PDP.

Not even Atiku in PDP. Atiku coming out is just going to be a mirage,” he said.

While commenting on the presidential ambition of the national leader of the All Progressive Congress (APC) Senator Bola Ahmed Tinubu, Primate Ayodele expressed doubt, saying: “Tinubu is just falling up and down. If he gets it ( presidential ticket) Nigeria will not move forward. It will still be the same Nigeria. So, Tinubu as a matter of fact is not even in the picture.

“If Tinubu becomes the President of Nigeria, it will be worse under him than Buhari. God has not ordained Tinubu to rule Nigeria.

“Even Osinbajo will not be allowed to do it. Because there is a lot of blackmailing surrounding him. They will knock him out with blackmail and will want to bring him down at all costs.”

Also commenting on what President Bihari is likely to do about 2023, he said: “Buhari will surprise a lot of people. Look at Malami, everybody should start looking at him, that’s one and then two, look at Fashola, people should start watching Fashola. These are the people that are in Buhari’s agenda. These are the people Buhari wants to give – Fayemi, Boss Mustapha start looking at him.

“The person that is going to take it, is within Buhari’s camp. So, don’t look at Tinubu, El-Rufai or even Osinbajo.

“Buni of Yobe, Zulum of Borno, Amaechi, Akpabio – these are people who are likely to become President and Vice President if the party fills them.

Primate Ayodele wo had predicted Buhari’s victory in 2015 as well as Governor Fayemi’s re-election in 2018, said the incumbent Ekiti State governor and Nigeria’s chairman of Governors’ Forum, Dr. John Kayode Fayemi is joking with the Ekiti people with his alleged announting of one of his loyalists, Abayomi Oyebamji as the preferred candidate for Ekiti 2022 on the platform of the APC.

“Fayemi is just joking with Ekiti people. Ekiti will not support Fayemi’s candidate, unless they rig it and rigging will not be attaceptable.

He then advised Ekiti people on those to consider for next governorship poll in 2022: “
These are the people that PDP can use, they can give them victory – Kola Olabisi, Segun Oni, Eleka, Olujimi. These four people should go and put their heads together and give one person to Ekiti. Let them go and meet the SSG of Fayemi. PDP will win Ekiti, except if PDP did not fill these people as candidates and they will lose. Free and fair election in Ekiti 2022, give it to PDP.”

primate Ayidele who was recently criticized by president Buhari’s media aide, Femi Adesina, said he was not intimidated in any way but the President’s aide attack. He said instead, he only felt persecuted but not offended as he has always been revealing the mind of the Almighty God to the world and many of his predictions have vindicated him. Hear him: “To tell you we are not intimidated, the boy who replied is my boy.Femi Adesina is my boy. So, why will I reply to my boy. If he becomes the governor tomorrow we’ll talk.. Adesina cannot insult me because he’s my boy. And he must be doing that work for me to be relevant. So, Adesina is making me more internationally relevant than Nigeria.

So, when Adesina replied to me, I didn’t reply to him. Adesina only tried to raise irrelevant points to make me more relevant. All he said, go by word, page by page are all false.. And even the ones he mentioned have come to pass. So, why will I be angry with the work of my hands?

Femi Adesina is my boy, that’s the headline. I can’t be angry with my boy no matter what. When he leaves there, we still meet. I’m in a permanent seat, that one is temporary.”

The popular cleric also bared his mind on the activities of two main Christian’s bodies, i.e Pentecostal Fellowship of Nigeria (PFN) and the Christian Association of Nigeria (CAN), he said: “I’ve seen anybody in PFN, I’ve not seen anybody in CAN. Because these people are only fighting for their pockets. You see them on the payroll of governors and Presidency. There are politicians. People ruling PFN are politicians. That’s why you see people like Adeboye will not talk, Kumuyi will not talk, only maybe Oydepo. And those who are talking before cannot come out and talk boldly.

“These are the people that constitute PFN and what is Ayokunle talking about? Does he have a vision? That’s the CAN President. We don’t even hear CAN Chairman of Lagos State. He has not been raising any point. What are we talking about CAN? It’s just an association of personalities. They are doing nothing. You now ask me, can’t you be CAN Chairman? NO! Because my own style is not going to be, ” he said

You are an architect of modern Oyo – Rep member, Odidi Omo felicitates Makinde on 54th birthday