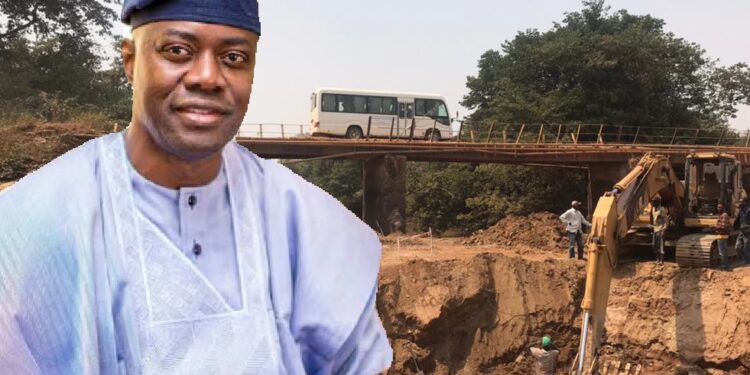 …… As Oyo, Oke-Ogun residents appreciate Makinde for snatching the initiative from FG

The people of Oyo Town and Oke-Ogun area of Oyo State has shown appreciation to the administration of Governor Seyi Makinde for taking up the initiative of reconstructing the Oyo-Iseyin federal road after decades of abandonment.

This is as the 72years old Odo-Ogun bridge that residents and motorists claimed has caused the death of hundreds of people is undergoing extension and reconstruction.

The bridge which was hitherto very narrow had lost most of the iron railings and barrier concretes which caused vehicles that lost break system to plunge into the river, where there are many rocks that caused instant death of passengers.

While talking with reporters at the site of the bridge extension, some of the people of Odo Ogun village, which is a stone throw to the river said they heaved a sigh of relief as the extension work has started late last year, because they were sure that the carnage they used to witness before the intervention of the Oyo State government on the road and particularly the bridge, would be no more.

Parts of the what the Oke-Ogun people described as commendable in the urbanization projects of the Seyi Makinde-led administration is the Saki Township Road that the governor will commission on Thursday at Saki West Local Government.

The Honorable representing Iseyin/Itesiwaju State Constituency at the State’s House of Assembly, Hon. Dele Adeola in an interview at the site inspection where there was the presence of the Chairman, Iseyin Local Government, Honourable Mufutau Abilawon and the National President of Iseyin Development Union (I.D.U), Alhaji Bayo Raji, said it is clear to everyone that Governor Makinde was out to make life easy, especially for the people in the hinterlands, as farmers and traders in the Oke-Ogun region can now connect the cities through various linking roads that have been constructed or reconstructed by the present administration.

“We can see that Governor Makinde has promised to stand by the people of Oyo State and make them enjoy governance and he is delivering as promised, the Oyo-Iseyin road is another episode in this line.

“We have toiled day and night to attract the attention of the federal government to the deplorable state of the road for over twenty years to no avail, we appreciate our Governor.”

In his own words, the Chairman, Iseyin Local Government, Hon. Mufutau Abilawon echoed others in praising Governor Seyi Makinde for the reconstruction of the Oyo-Iseyin road project, hammering on the Odo-Ogunbado bridge that is undergoing reconstruction and expansion.

He fingered the federal government as neglecting the road, which he said has resulted in the deaths of his people, saying the Vice President, Prof. Yemi Osinbajo even used the road to campaign during the run up to the 2019 elections and nothing was done till Governor Makinde took up the responsibility of reconstructing the road after getting the go-ahead from the Minister for Works, Raji Fasola.

He told newsmen about his experience as a student of the then St. Andrews College of Education, Oyo in the 80s and he was going back to Iseyin among other students for holiday, but on getting to the bridge, there was an overflow of the river and they had to go back to Oyo and spend two days before the water level subsided under the bridge.

The National Chairman, Iseyin Development Union (I.D.U), Alhaji Bayo Raji pointed out that the construction of Iseyin-Oyo road and the 72year old Odo-Ogun bridge is a major relief for the people of Oke-Ogun.

He said the bridge’s side culverts were last repaired by the then Military Governor Ike Nwosu in 1996 and nothing has been done afterwards despite reports of deaths of travelers in their hundreds.

“The construction of Oyo Iseyin road is a major relief to all the people of Iseyin and Oke-Ogun generally, that is the road that leads straight to Oyo and by extension to Osogbo, Ogbomoso for now among other areas.

“That bridge is seventy two years or more by now, in fact, there have been cracking and chipping of the sides while the iron shoulders have been removed by accidents, since the last intervention by the Nwosu administration, nothing has been done till now that Governor Makinde has taken he shine off the owner of the road which is the Federal government, we sincerely thank the governor for this gesture like we appreciated him on Moniya-Iseyin, LAUTECH College of Agricultural Science and Renewable Natural Resources as well as the Ogbomoso-Fatope-Iseyin road that will be flagged off soon.”

Mr Segun Olaoye, a fisherman and resident of Odo-Ogun village prayed for the present administration in Oyo State for the reconstruction of Oyo-Iseyin road and especially the expansion and reconstruction of the Odo-Ogun bridge, which he said will stop what he called needless deaths of motorists and their passengers.

Olaoye recalled a particular day over eighty lives perished in the river as their vehicles were swept into the river when the river overflowed the bridge and over 40 corpses were recovered while others were swept away.

He appreciated the administration for putting a stop to waste of lives by reconstructing the road and the bridge.

“There is a particular day I will never forget, as a fisherman, I was down the Ogunbado river and I started seeing shoes and slippers flowing up the river, I knew something had happened, I quickly rowed my canoe to the river bank where I met many people crying and wailing.

“They said over eighty people have been swept away as their vehicles reached the bridges and upended by the powerful river flood, we were able to recover forty corpses while the rest were swept away.

“If the present government in the State could start its reconstruction and expansion, we should all appreciate them, at least the unnecessary deaths will be no more.”

The Project Manager of KOPEK Construction Company Ltd., Engr. Ayman Zakhour said the 34.85kilometer Oyo-Iseyin road will be delivered according to the Bill of Engineering Measurement and Evaluation (BEME) specification, which is 60mm thickness for the road asphalt while the extended Odo-Ogunbado bridge is 12meters (end to end) with carriageway of 8meters.

He added that the bridge will be completed by early March before heavy rains will start and ten kilometers of the road would have been tarred by early February.

Engr. Ayman called on the road users to be assured of good quality of work on the road and the bridge, as required by their client, which is Oyo State government.

Meanwhile, the 9.70kilometers Oke-Ogun Poly- Saki Township road will be commissioned on Thursday by Governor Seyi Makinde in his efforts to achieve the urbanization policy of his administration.

The road was re-awarded after the contractor that was handling it before failed to meet most of the contractual agreements signed with the last administration of late Senator Abiola Ajimobi.