Accord  candidate flags off governorship campaign in Ogbomoso Wednesday 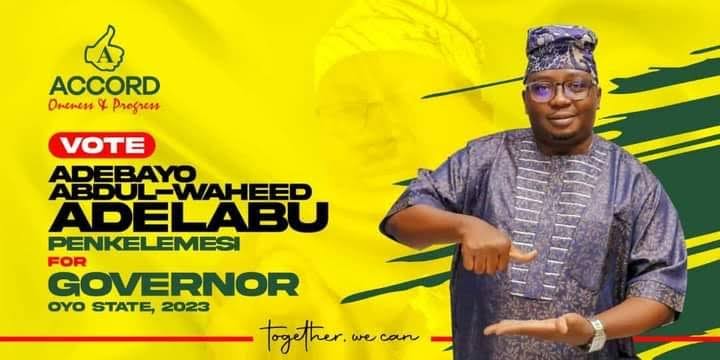 The flag-off of the campaign of Accord governorship candidate, Oloye Adebayo Adelabu will hold Wednesday, January 25, 2023.

A Statement signed by the Director of Media, Bayo Adelabu Campaign Organisation (BACO), Hon Bolaji Tunji said the event will hold in Ogbomoso, the hometown of the Accord deputy governorship candidate, Professor Abiodun Ayandele.

Quoting Oloye Adelabu, the statement said the choice of Ogbomoso was significant because of the importance of Ogbomoso in the politics of Oyo State. “

Apart from our deputy governorship candidate coming from Ogbomoso,  we also have the leader of the party, Senator Ayoade Adeseun from Ogbomoso.

The same Ogbomoso is the home of the immediate past Speaker of the Oyo State House of Assembly, RT. Hon. ‘Gunju Ojo. “Most significantly,  Ogbomoso is the home town of our father, the highly revered and cerebral political polyglot, Baba Chief Samuel Ladoke Akintola who was a contemporary of my grandfather, Adegoke Adelabu popularly known as Penkelemesi.

The people of Ogbomoso have always been progressive-minded and like the other zones in the State, have always given our aspiration full support, hence our choice of the town”. The event starts by 10 am at the Soun Ogunlola hall, Oja’gbo, Ogbomoso.