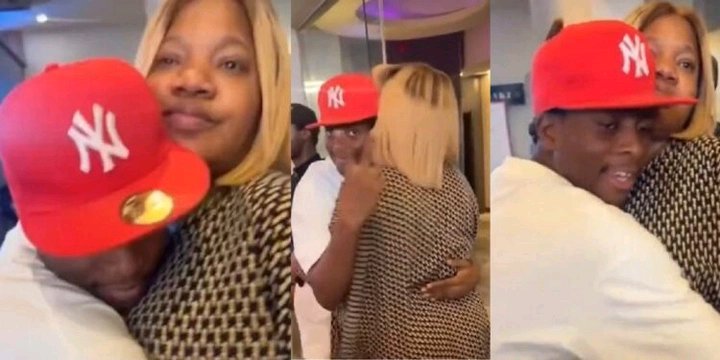 The mother of one met the Instagram content creator at an event that was held recently, and Sydney, who appeared excited to see the actress, gave her a very loving hug.

A video from the meeting that found its way to the internet showed Sydney hugging and holding the married actress clumsily.

In no time, the video went viral and received a deluge of criticism from social media users who felt that the way Sydney held Toyin in the video was inappropriate.

See some comments as you scroll.

@abdulafeezbaba wrote, “How would you hold a married woman like that, nawa for these people ooo”.

@abdulafeezbaba, “How would you hold a married woman like that, nawa for these people ooo”.

@kerllzmusic, “All of you shouting married woman, does she look comfortable to you??? If she vex change am for the bobo, una go yarn, she no vex now, una still dey yarn.”

@leboss101, “I don’t care who you are, you are not ,hugging, rubbing on or grabbing my wife, any hug that lasts more than 3 seconds is unacceptable. Ewo ni Pala pala”.