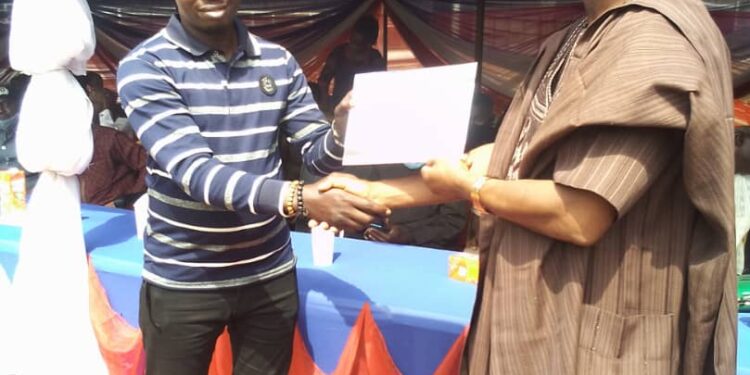 In recognition of his active service to the Federal Ministry of Interior through adequate reporting, Kazeem Awojoodu of the Daily Independent Newspapers has again been honoured with certificate/award of merit through the Nigeria Security and Civil Defence Corps Oyo State Command.

Kazeem Awojoodu was honoured with the Certificate/award of Daily Independent Outstanding Security Reporter of the year.

Recalled that Kazeem Awojoodu who also doubles as the publisher of the online news platform known as 9Janewshub.com.ng was also recognized by the Command last year with an award as the most outstanding crime journalist of the year 2020.

Presenting the award at the Command Headquaters , Agodi Ibadan, during the end of the year activities, the State Corps Commandant CC Adaralewa Micheal said, Kazeem was honoured for outstanding patriotic service, media reportage and support to the progress of the NSCDC Oyo State Command.

He also confirmed that the Command through its Anti-Hunan Trafficking and Child Protection Unit treated 414 cases ranging from child trafficking, rape, defilement, domestic violence, forceful marriage among others.

Adaralewa also stressed that Peace and Conflict Resolution Unit recorded 340 cases, resolved 290 and transferred one of the cases while 49 of the cases are pending.

He maintained that the Anti-Fraud Unit of the Command have assisted citizens in the state who have brought different cases to it, the unit handled a total of 120 cases involving (36,378,000) to the owner.

Kazeem was honoured alongside other journalists from other medium such as Malik Olowatoyin of Nigerian Tribune, Jadesola Ajibola of the Jamz FM, Temitope Shittu of AIT, Kunle Ojo of Galaxy TV, Rashidat Makinde of the FRCN, Sheu Suliman of News Agency of Nigeria and others.

2023: Primate Ayodele reveals those who can succeed Buhari