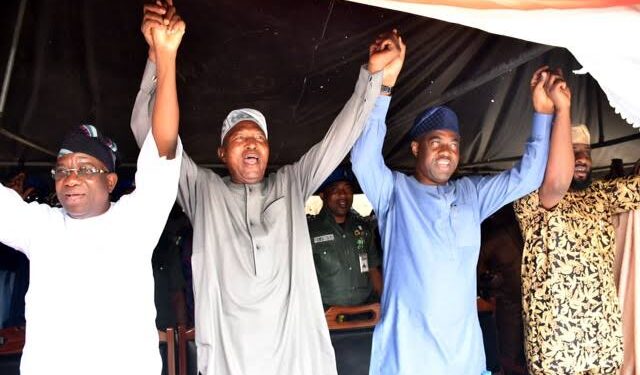 The deaths of Otunba Alao Akala, the Olubadan of Ibadanland, Oba Soliu Akanmu Adetunji (Aje Oguguniso 1) and the Soun of Ogbomoso, Oba Jimoh Oyewumi Ajagungbade have been described as a big challenge to the governor of Oyo State, Engr. Seyi Makinde.

This was said on Friday by the former Chairman of Oyo State’s People’s Democratic Party ( PDP), Alhaji Kunmi Mustapha in a statement made available to newsmen in Ibadan.

Mustapha hinted that it will take the grace of the Lord for the governor to navigate the period of loss of the notable monarchs and the former governor who he described as a quintessential politician.

He consoled the Governor and the people of the State on the deaths and prayed that God will give the families the fortitude to bear the losses.

“The overall development of Oyo State is always his concern with his popular and successful 13-point agenda. He is a rare gem. He ruled Oyo State as the Executive Governor, under our great party-PDP, with a remarkable difference, which make the good people of Oyo State know the exact meaning of good governance and self determination. This gave him the popular accolades- OYATO GOVERNOR”.

“His wealth of administrative and political experience is God’s gift and well built. He is a real Human Manager,a lover of all who is loved by all. He always derive joy in people‘s happiness and building people. Dr Christopher Adebayo Alao-Akala, the Agba Akin of Iseyinland shall be greatly missed”.

“My condolence to the People’s Governor of Oyo State, the God Sent Man, His Excellency, Engr. Oluseyi Abiodun Makinde- Executive Governor of Oyo State.He received the news of the passing away of Governor Christopher Alao-Akala Omo Iya Alaro with rude shock and pinched heart. Almighty God shall uphold you.

“This is really a trying period for our Governor over these losses, these figures were major movers and shakers of Oyo State before their demise, the late Olubadan and Soun were prominent Obas that have contributed so much to the success story of the present administration in Oyo State as well as the growth in their respective domains, we shall continue to pray for the Governor to be granted the fortitude to bear the loss”.

“Again, My special prayers to Almighty Allah is to uphold His Excellency, Engr Seyi Makinde at this mourning and crucial period in Oyo State. A time we lost two of our first class and highly respected monarchs – His Imperial Majesties, Oba (Dr) Oladunni Oyewumi Ajagungbade, Soun of Ogbomoso land and Oba Saliu Adetunji Ajeogungunniso, Olubadan of Ibadan land, in just one month. These are great losses. Almighty God in his infinite mercy shall give His Excellency, the much needed fortitude to bear the great losses. Amen. We cannot appeal God’s judgement, let’s accept it in faith.”

Kunmi, in his statement sent his condolence to the people of Ogbomoso and Oyo State in general over the death of the one time local government Chairman, deputy governor and governor of Oyo State, Otunba Christopher Alao- Akala, urging them to continue the good work left by him.

The former PDP State Chairman appreciated the approach of Governor Makinde to the selection process of the next Olubadan of Ibadan, which he said has calmed many frayed nerves, calling on the Governor to maintain the status of an arbiter in the process to maintain the peaceful atmosphere in the State.

“Citizens of Oyo State have been praying for the Governor to be divinely guided on he would intervene in the selection process of the Olubadan of Ibadan and we are happy that the Governor has finally used his divine wisdom to resolve the crisis.Glory be to Almighty Allah.”

The death of Otunba (Dr) Christopher Adebayo Alao-Alaka was announced in the early morning of Wednesday.