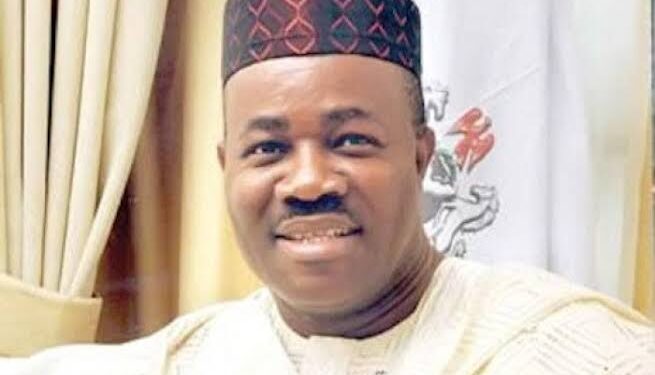 Youth leaders from the Niger Delta region on Tuesday applauded Senator Godswill Akpabio for conceiving and implementing projects in line with well-defined vision and strategies.

‘’The evidence so far is that the Minister of Niger Delta Affairs, Senator Godswill Akpabio. is well-informed of what is expected of him and he is rising to the occasion admirably’’

At a meeting in Owerri, the youths commended Akpabio for giving priority to the basic infrastructure like roads, electricity, education, drinking water, health, land reclamation, construction of jetties and canalization.

‘’Senator Godswill Akpabio is offering permanent solutions to the Niger Delta problems. He is giving succour to the afflicted, building bridges of friendship across the region and giving the people a sense of belonging’’.

The youth leaders spoke on the 3 per cent contribution of oil companies from their annual budgets to NDDC, the huge debt owed the commission by International Oil Companies, IOCs, operating in the region, Akpabio’s doggedness and sincerity and the financial resources to meet NDDC recurrent and capital expenditure,

In an address read on behalf of Youth Groups in the Niger Delta by the President, Coalition of Progressive Niger Delta Youths (CPNDY), Mr Chukwuma Nwabueze, the youth leaders praised Akpabio for properly and efficiently managing the Ministry of Niger Delta Affairs.

They also applauded the former governor of Akwa Ibom State for galvanising the people into lending full support to the government in the campaign to transform the region.

The youths emphasised proper coordination, distribution pattern of projects across the nine states of the region and completion of some abandoned projects.

‘’Our attitude to the call for the constituting of the board for the Niger Delta Development Commission in 2021 is one of extreme caution. We also urge President Muhamadu Buhari not to yield to the temptation of constituting the NDDC Board now’’

The youths also highlighted the on-going East West Road project, the 1050 bed hostel in Uyo, Akwa Ibom State, human capital development, skills acquisition centres in all the 9 states of the Niger Delta and the132kv substation in Ondo state, which will supply power to about 5 local governments.

‘’The good people of the Niger Delta have suffered from the myopic advice of The Ijaw Interest Advocate (IIA). We feel strongly that Mr Musa Saidu is a busy body that chose to cry where there is none. We urge the general public to disregard the lies, rumours peddled by the Izanzan Intellectual Camp, Saidu and other unpatriotic elements’’.