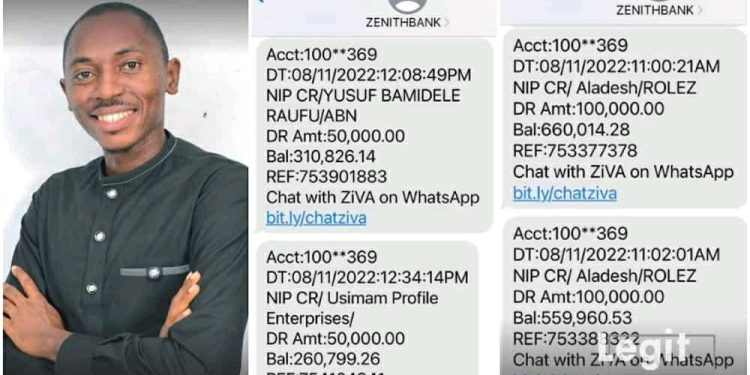 On the morning of November 18, 2022 at about 10am, Feiba; Jonah Lokoson, a Nigerian man got a debit alert of N100k on his phone. It came from his Zenith Bank account. Feiba was left in shock because he did not initiate any transanction using USSD, banking app, POS or ATM.

Alarmed by the debit alert, he immediately placed a call to Zenith Bank customer care line but the call didn’t go through, so he decided to visit a branch nearest to him at Gwarimpa, Abuja to file an official complain.

Just when he was preparing to leave the house for the bank, Feibai got two other debit alerts of N100k each, which means N300k has left his account with less than twenty minutes and he initiated none of the transanctions. This probably meant fraudsters had gained access to his banking details and urgent action needed to be taken about it.

Feiba told Legit.ng that he became truly worried, so he decided to quickly send a mail to Zenith Bank so that his banking pin could be deactivated to forestall further loss. He sent a copy of the mail to Legit.ng.
PAY ATTENTION: Share your outstanding story with our editors! Please reach us through info@corp.legit.ng!
He narrated the story.

“While preparing to visit, I got 2 other alerts so I emailed Zenith to deactivate my account. I got a response saying my account has been deactivated. I then decided not to go anymore.”

Legit.ng has sighted the response from the bank assuring no further debits. But just when he thought the debit alerts would stop since his account had been deactivated, he got another debit alert one hour later. He then decided to visit the bank.
He narrated his ordeal:

“I then went to my mobile app to change my password and my ATM pin and my banking details pin. After doing this, I decided to dress up and go to the bank to file a complaint.”

Whe Feibai got the bank branch at Gwarimpa, he expected that he would be attended to urgently as he had a real emergency. He was however mistaken as he was asked to join a long queu, risking some more debit alerts from whoever was stealing from his account. He protested strongly but was instead bundled out of the bank.

“When I got to the bank, I told customer service of my urgent complain. The lady demanded I join the queue. I told her I can’t join the queue because this is an emergency. Everyone joined her and insisted that they are also in an emergency.”

But as the arguement over the urgency of his complain was going on, Feibai got another debit alert right inside the bank before the customer service. He was then truly alarmed.
He narrated the story:

“This was when I vibrated and someone (a banker) walked up to me and told me to dial *966#. We did that but the command was not commanding. Hence I insisted that the customer service should attend to me instead. She refused and this was when we started exchanging words and I was thrown out of the bank by security.”

When he was outside the banking hall, Feibai said a banker met him and collected his account details and promised that he would not lose more funds. He equally promised that the bank would contact Feibai, but a week later, he received no calls from the bank.
His words:

“Outside the bank, a banker took my account number, went into the bank and removed my bvn from my account. After doing this, he assured me that I won’t lose further funds and that I should go home, the bank would contact me. I waited for a week, but the bank didn’t contact me.”

Failing to hear from Zenith Bank, Feibai decided to take another trip to the Gwarimpa branch to know what was going on.

He narrated what followed after the second visit:

“The HOP interviewed me and sent an email to someone to request further details about the transaction. After a month, I went back to the HOP where I opened my branch and he showed me 2 phone numbers saying these numbers are the people who operate the account where my money was paid to.”

What next for Feiba?

When the money was finally traced to the phone numbers, Feibai then asked the bank what would be the next line of action.
Here is what he told Legit.ng:

“I visited the bank and caused a scene and the HOP said I kept my card carelessly so maybe someone copied my card number and got access to my funds. At this point, I am getting a lawyer to intervene and all expenses would be paid for by the bank as well as damages.”

Feibai told Legit.ng that he operates laundry services in Abuja. Legit.ng sent a mail to Zenith Bank requesting information concerning the claims made by Feibai, but there has been no reply as of press time.

Lady loses N4 million in her acount within minutes

Meanwhile, Legit.ng also reported that Nigerians dragged Zenith bank after a customer lost N4million in 15 minutes.
The lady, Jeniffer said in a video thread on Twitter that her account has a transfer limit of N200k daily.

She said the millions were moved to another account without authorisation.