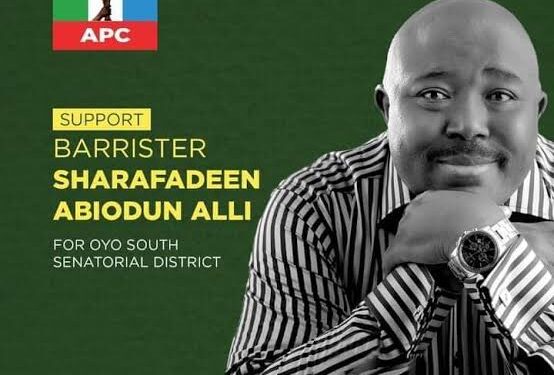 We need to go beyond that, now that the people Of Oyo South Senatorial district want to proof to the world like Van Maurison does in his album” They have got the power “. Yes, it’s not going to be decided by financial muscles. People’s votes are the powers ! Voting as sage aptly says ” is not only your right but your power “. the power to make reasonable choices .

Hear are some of the five cardinal qualities the people of Oyo South must be on the look out for in a candidate, to make the right choice of a Senator to protect their interests at the upper Chambers in the forthcoming elections.

Let’s begin with the 3Cs , competence, character and capability to do the job . As Allan Simpson says ” without character, nothing else matters ” .

Noble Character has sufficiently equipped Barrister Sharafadeen Alli to stay in the political turbulence consistently for the past three decades plus unhurt. The magic is, he relates amicably with both the leaders and lackeys in the political arena and treat both with deserving respect.

The Character trait doesn’t start with politics, it’s only a mean to an end . It’s the shackless character that made people to point him out and honour him in 1992 as the great Ambassador of Kuti Hall as he was awarded by the National coucil of Islamic youth organisations in Nigeria same year among others .

Value shapes human progress. Dynamisim of the People who have been noticing his extraversion personality made them to stand staunchly behind and elected him in 2013 as the president of ” Omo Ajorosun ” an Ibadan based social club ,in a keenly contested election.

It will also be recalled that in April 1998, , he was elected to represent the good people of Oyo South Senatorial district under the defunct UNCP but by Jove was not sworn in due to the military incursion that period. May be by now, people have been beckoning on him to go for another higher post.

Personal value ,which Olusegun Oladiipo describes as ” person’s driving force” and the inherent capacity to lead pushed him to the envious position of the PDP state secretary at age 36 and was made the State acting Chairman by September 1999.

In a nutshell, when one is adequately prepared to serve , he is sufficiently equipped with experience and he meets the opportunity to be called by his people, the great Roman philosopher, Lucius Seneca reminds us that our great expectation should be victory.

Funnily enough, Whilst it’s apparent that one candidate from other party is foised on the people as a “Spur of the moment ” to settle political scores when the door was banged on him in Oyo cental, he ran to test waters in Oyo South. In the same vein, another candidate thought naively though, that without political experience, his parent’s name is enough to earn him the victory. People will prove them flat out wrong !

No doubt, the only person close to and is trusted by the electorates, well prepared and eminently qualified for the seat is no other than Barrister Sharafadeen Alli, the Maye Balogun of Ibadan land. Let’s hope for the best. With God, all things are possible.

Watch out for the concluding part of this series soon.