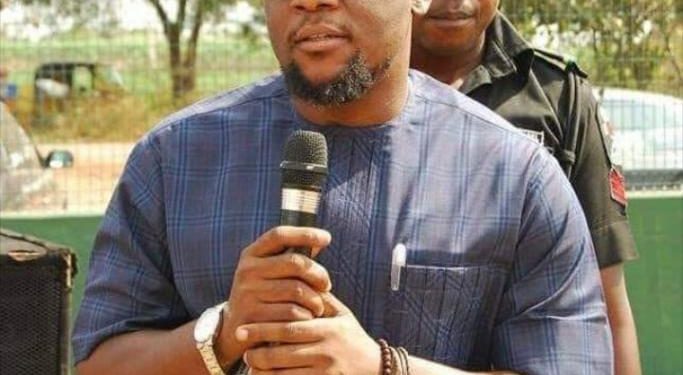 …. Says Oyo is united in support of Atiku

Olasupo made the reference on Saturday during a life interview on Inspiration FM in Ibadan, saying the President’s flagrant violation of the CBN Act and other policy crisis have left Nigerians poorer.

He attributes the action of the Presidency in ordering the Central Bank of Nigeria to print more than the stipulated five percent of the nation’s naira denominations as abhorrent, saying the nation needed a true leadership to escape the free downward slope of it’s economy.

“CBN acts only allows for the printing of money to cover for shortfall in income to the federal government but not exceeding 5% of previous year income of the government. Buhari government have been averaging N4tr per annum since inception which means the country should not have exceeded N800b but records show exceedingly more than that.

”The economy today is in shambles, we are borrowing to service loans while Nigerians are stupefied as to where the nationally-generated revenues are going, we must change the course before this ship is wrecked by APC.”

While reacting to the insinuation that the People’s Democratic Party (PDP) in Oyo State was not United ins support of the party’s Presidential candidate, Alhaji Atiku Abubakar, Olasupo said the insinuation was wrong as all the candidates of the party from the National Assembly, State Governorship, State Assembly and Presidential Candidates would enjoy the support of PDP members in the State.

Hon. Abiodun noted that as Nigeria has been experiencing bleak economic growth, ethnic disunity and infrastructural decay, the only candidate with the required experience and will to change the country’s fortune for the best is Alhaji Atiku Abubakar.

“At this point, we need to critically look at our choices. Nigeria has been so fragmented. We don’t need to play ethnic cards now.

”It is time to elect a leader that will say this is the situation and this is the way to go about it. It will not be an easy solution but at the end of the day it will pay us all, I know Nigerians are ready to make the sacrifice.

“PDP in Oyo State is in support of Atiku, as party members, we are in support of all candidates of our party. We are talking of Oyo State, Makinde has done everything we want, my community is an example.

“As an insider, whatever I tell you about this case, you can take to the bank. We have just one candidate and that is Alhaji Waziri Atiku Abubakar.”

The former legislator called for a true constitutional amendment effort that will shape the Nigeria that will be the pride of the world, saying only a leader that will be realistic and fair in promoting hard but positively-enduring policies like Atiku Abubakar could take Nigeria to the promised land.

“In 2019, Atiku said sell NNPC and they said he was a thief. Now it has been privatized. Go and check the records of NNPC, it has been on the negative.

“It is time to elect a leader that will say this is the situation and this is the way to go about it. It will not be an easy solution but at the end of the day it will pay us all, I know Nigerians are ready to make the sacrifice.

“From 2015 to 2020, Close to 300billion naira has been used for turnaround maintenance for the four refineries that have not contributed anything to the nation’s purse all the while. In 2021 another 600billion was apportioned for the same thing to be delivered before 2026.

“Now we have Dangote Refinery that is gulping just 19billion dollars. With its own ports and other facilities. Let the regions control their resources. Amend the constitution to reflect this. The rest are grammars. There is urgent need to look at our constitution and make amendments.

“One of the luckiest Nigerians is President Muhammadu Buhari, every hard policy has been taken in by Nigerians without a whimper but during the time of GEJ, the whole nation rose against just the single effort to privatize the downstream sector and to stop fuel subsidy, even Buhari said it was a scam, today we can see that it is not just subsidy that is a scam but Buhari himself.”

The Iseyin-born Quantity Surveyor called on Nigerians, especially Oyo State residents to take their destinies in their hands and vote Atiku so as to escape further economic depression and poverty.