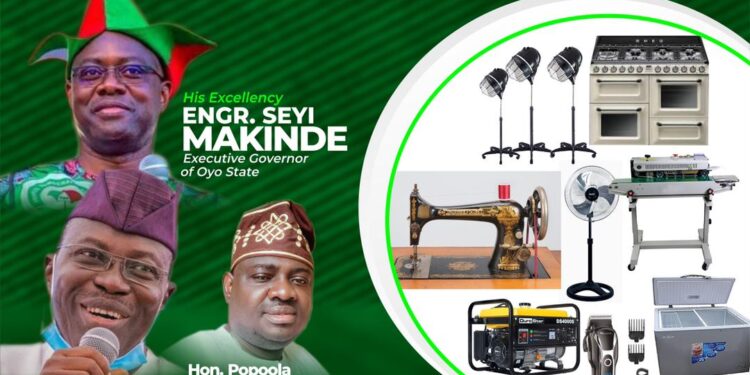 A serving member of Oyo State House of Assembly, representing Ibadan Southeast Constituency 2, Ibadan, Oyo State, Hon. Popoola Ademola Olusegun who is popularly known as “Popson” has set to put smiles on the faces of his constituents via organising of empowerment and graduation programme

Popson while in an interaction with pressmen disclosed that the empowerment and graduation programme would come up on Tuesday, January 11, 2022 at St John Catholic Primary School, Eleta, Ibadan, Oyo State at 10am prompt.

Popson maintained that cash would also be given to constituents, while the dug borehole in Ward 10 axis of the local government would be commissioned on same date.

The Lawmaker stressed that the beneficiaries across the wards that make Ibadan Southeast Constituency 2 would benefit from the itemised empowerment materials.

While substantiating on reasons facilitating the empowerment and graduation, Popson disclosed that the allocation of those materials to the constituents is a way of reciprocation as a result of unalloyed support that the constituents are giving to him.

He said some promises were made during the electioneering campaigns, maintaining that those things are to be given in order to fulfill the promises.

The parliamentarian said that the graduands who were enrolled for vocational trainings would have the equipment to start their their jobs and maintain good status in the society.

He however called on those who have not benefited to be patient, that the dividends of democracy will be extended to the doors in nook and cranny of the state constituency.

He promised that the forthcoming programme would not be the last, as he is still working assiduously to lift the constituents out of obvious poverty.

Popson enjoined the constituents to throw weight behind him, and Governor Seyi Makinde led administration, in order to attain more unprecedented feats.