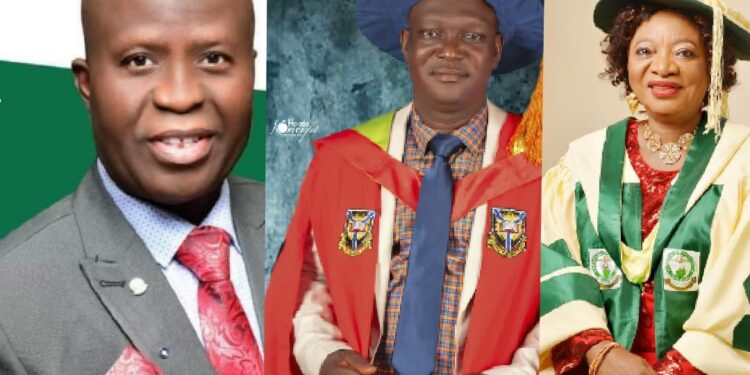 The lectures have been scheduled to hold at the large lecture Theatre of the Faculty of Science situated on the FUOYE main campus in Oye-Ekiti, Oye Local Government Area of Ekiti State.

Prof. Omotola, a Professor of Political Science, who is currently FUOYE’s Deputy Vice-Chancellor (DVC), Administration, is delivering an inuagural lecture titled: “The troubled Trinity: Election, Democracy and Development in Nigeria”.

The erudite political scientist will be reviewing his admirable academic journey and huge contribution to knowledge in his field as relevant mainly to the Nigerian political realities and challenges.

Prof. Omotola obtained his PhD in Comparative African Governance and Politics from the University of Ibadan, Nigeria. He has also served as FUOYE’s director of Research and Development and head of the Department of Political Science, as well as Dean, Faculty of Social Sciences.

Prof. Omotola recently served on the global scene as a visiting professor at the Bayreuth International Graduate School of African Studies (BIGSAS), University of Bayreuth, Germany, he previously worked as a consultant in the Office of the Director General and Head, Socio-Political Unit of the Department of Research and Training, National Institute for Legislative Studies (NILS), National Assembly, Abuja, Nigeria (October 2015–October 2016); and was also senior lecturer in political science at Redeemer’s University, Nigeria. His primary research interests are in Comparative and African democratization studies. His other research interests include oil and environmental politics in the Niger Delta, security and post-conflict peacebuilding, and development studies. He has more than two decades of teaching and research in political science as well as many publications in referred books and journals, including African Affairs and Commonwealth and Comparative Politics.

Prof. Oyarekua is immediate past Dean, FUOYE’s School of Post Graduate Studies (SPGS). Her research interest is in the specialized scientific area of Food Microbiology with specialization in infant nutrition.

The distinguished Professor of Food Science and Technology is a seasoned Administrator, Management Consultant and with flair for strategic management. She is an administrator of unusual versatility, distinguished scholar and an amazon with a brand of reference, whose exploits in the field of human endeavours have traversed many terrains and who once held the mantle of leadership as the Provost of the prestigious defunct College of Education, Ikere-Ekiti.

Professor Oyarekua had at a time worked as Research Technician at the International Institute of Tropical Agriculture (IITA), Ibadan; Research Technologist at the Post Graduate Medical Research Center, University College Hospital, Ibadan; Lecturer at the Polytechnic Ibadan; Federal Polytechnic Ado-Ekiti; Senior Lecturer at the erstwhile University of Education, Ikere-Ekiti (TUNEDIK) and University of Science and Technology Ifaki (USTI). She was also a Senior Lecturer in College of Medicine Ekiti State University Ado-Ekiti (EKSU)

Because of her persona, Oyarekua was the State Financial Secretary of the Committee of Provosts of State Colleges of Education in Nigeria and was also the National Secretary General of Committee of Provosts of Colleges of Education in Nigeria. She was the deputy Dean of Faculty of Science in Federal University Oye, Oye-Ekiti Nigeria. She was the immediate past Dean, School of Post-Graduate Studies (SPGS) Federal University Oye-Ekiti.
Oyarekua has authored over 40 publications in many national and international reputable journals in the field of food Science.
Prof. Oyarekua belongs to several professional bodies within and outside Nigeria. Prof. Oyarekua has attended many conferences nationally and internationally.
She has served as Chairman or member of many University Committees. She was once a Board Member Ekiti State Community Based Poverty Reduction Agency World Bank Project 2003,secretary Ekiti State Committee on Relocation of College of Education Ikere-Ekiti among many other positions. International Co-coordinator Helping-Hands International (Mission to the Aged)

She was a visiting Scientist in National Institute of Health Bethesda, USA
And international Institute of Research and Development France.
She is a Fellow of many National and International Associations.
She is equally a recipient of several awards some of which include: Award as Honorary Mayor- President of the City of Baton Rouge Baton Rouge Louisiana USA; Award of Excellence as the most transformative female Provost of the Year on the occasion of the 8th Dubai Transformational Leadership Award (TLA) . Dubai, UAE and Award of lifetime achievement in recognition of immense contribution in the development of higher Education by The ICT-University Foundation USA 2021, among many other distinguished awards.