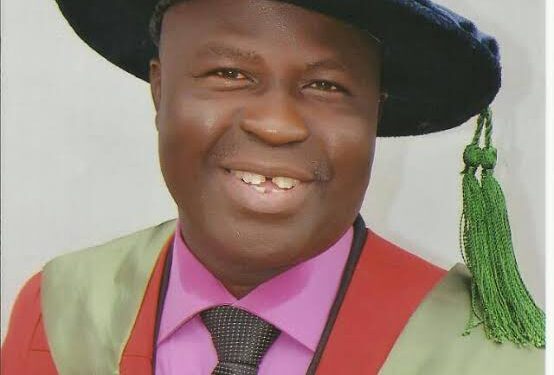 The Vice-Chancellor , Federal University Oye-Ekiti (FUOYE), Prof. Abayomi Sunday Fasina has assured graduands of the institution’s 2018/2019 and 2019/2020 academic sessions, that issuance of their certificates would not exceed February 2022.

The graduands of the two academic sessions in focus will be officially conferred with first, second and third degrees of their respective fields of study on 18th December, 2021 at the Grand finale of the weeklong 5th and 6th combined Convocation ceremonies billed for between 13th and 19th December, 2021 on the University main campus in Oye-Ekiti.

In a statement co-signed by Public Relations Officer (PRO), Mr. Foluso Ogunmodede and the Special Adviser on Media Matters to the Vice-Chancellor, Wole Balogun, and made available to newsmen in Ado-Ekiti on Monday, disclosed that the VC has met with the representatives of the graduands in focus, who were officially scheduled for convocation on December 18 at the 5th and 6th combined Convocation ceremonies assuring them that though their certificates were ready, its issuance would not commence until a substantive Registrar was appointed.

The substantive registrar, according to the Vice-Chancellor, who would be appointed by the University Council in February, 2022 would append his signature on the certificates.

“The University Governing Council has already begun the process towards appointing a new and substansive Registrar with advert placements in three national dailies in November, 2021.

“The new Registrar will be appointed in February, 2022 and he or she will append his or her signature on your certificates and by then, the certificates will be officially ripe for collection.

” In the meantime, following the Regulations of the University, the Management has since prepared your statements of results. I urge you once again, to be law-abiding and peaceful citizens of this country whom we shall always be proud of, as worthy ambassadors of FUOYE who have been groomed to acquire requisite knowledge and character with which they could be successful anywhere they find themselves across the globe.

“Beware of being sponsored by some disgruntled elements who are planning to impede the progress and development of your great institution, FUOYE, by deliberately and devilishly sponsoring violence against the institution and against the forthcoming 5th and 6th combined convocation ceremonies. “This is your day of glory and you should all enjoy it. Do not allow the enemies of progress to mar the day for you. Resist any temptation to mar the day with any act of insurbodination against the University Regulations and you would be glad eternally for doing so.

“FUOYE is proud of you all. Go to the world and conquer the world. We love you all.”

Meanwhile, Fasina sounded a note of warning to the graduands, saying, “the Management also wishes to use this medium to warn any disgruntled elements who might have accepted to be used by enemies of progress to forment trouble during the forthcoming convocation ceremony that the security operatives have been duly informed of such plans and that they will be adequately dealt with should they try to act against the University Regulations.”