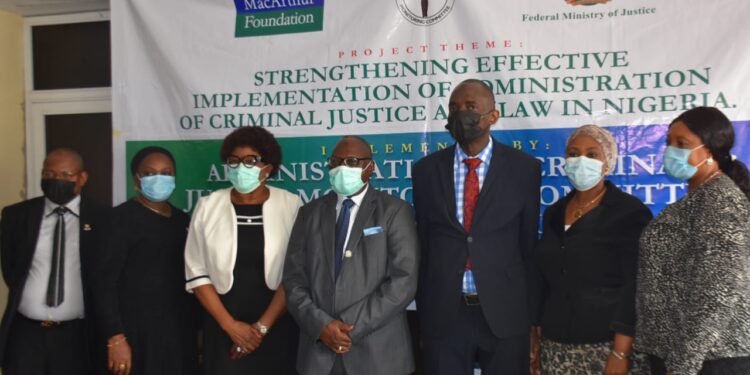 Correctional Centres in Oyo State will no longer be congested with the implementation of Administration Of Criminal Justice Monitoring Committee (ACJMC), says the Oyo State Chief Judge, Justice Munta Abimbola.

Abimbola gave this assurance on Monday in Ibadan during a workshop organised on the effective implementation of Administration Of Criminal Justice Law in Nigeria.

The News Agency of Nigeria (NAN) reports that the workshop implemented by ACJMC, Federal, was supported by MacArthur Foundation and Federal Ministry of Justice.

Abimbola said effective implementation of the administration of criminal Justice Law in the state would ensure reduction of congestion of prisoners in correctional centres.

He added that it would ensure that juvenile offenders were not kept unnecessarily longer at the centres as the law would FasTrack discharge of judgements.

According to him, it will ensure compliance with the provision of the Constitution which states that anyone accused of an offence will not be judged until he/she is proved guilty.

The Oyo CJ underscored the need to carry the public along and get them involved in the implementation of the law.

He thanked MacArthur Foundation and the Federal Ministry of Justice for supporting the state especially by providing sufficient equipment for the Secretariat established for ACJMC, Oyo State.

“When you have functional secretariat, the performance of the committee will surely improve.

“There will be better disemination of information to all stakeholders involved in the committee,” he said.

Also speaking, the Secretary, ACJMC Federal, Mr Suleiman Daudu, said the project filled the vacuum created by governments that relegated the development of criminal justice system to the background.

He said the neglect led to the current state of insecurity, corruption, perennial congestion of detention and correctional facilities and courts.

Daudu said the activities to be carried out in the project included technical and logistic support to various emerging ACJMC across the country.

He remarks that the responsibility for upholding and progressing the objectives of the ACJMC clearly rests on all criminal justice stakeholders.

“It’s on this note that the importance of strategizing through synergy, sharing of information, knowledge and skills cannot be over emphasised.

“Oyo is the 13th state we are implementing the project, we still have about 25 more states to deliver.

“We congratulate Oyo for the remarkable success it had made in the passage of the criminal justice law and its implementation.

“Our theme shall endevour to guide them to create a road map toward the discharge of their duty effectively, we will provide the Secretariat the daily ground/rule for its management,” he said.

Also, the representative of the Oyo State Police command, CSP Olufunke Fawole said the ACJMC gave the police a wider knowledge of how to conduct proper and effective investigation in the discharge of their duty.

“The law enlightened the police to be more effective, especially on how to carry out arrests.

“It made us to know the importance of having intelligent policing and to be very sure of the offence being alleged before we do any arrest,” she said.

The highlight of the event was the inauguration of the Oyo State ACJMC Secretariat by Justice Abimbola.

The Oyo State ACJMC was inaugurated on Jan.28 and the committee is led by Justice Ladiran Akintola. (NAN)