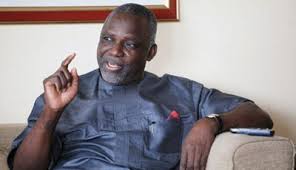 A group under the aegis, Nnaji for Continuity and Transformation support group has charged all shareholders in Enugu state to support Professor Bart Nnaji, Nigeria’s former Minister of Power who had also served as Minister of Science and Technology, to emerge as the next Enugu state Governor.

Speaking during their meeting in the state, the convener of the group, Comrade Anele Ezike, posited that with a candidate like Professor Nnaji, there would be serious Economic revolution in the state.

He maintained that the group is already engaging stakeholders in the state to garner their full support for Nnaji.

“Professor Bart Nnaji in his loyal and committed nature would ensure that development spreads across all parts of Enugu State. We are calling on all Enugu state indigenes both at home and in Diaspora to stand behind this light that is about to shine”.

“Professor Nnaji is the first Black man in American history to be bestowed with the title of Distinguished Professor of Engineering, and the first African to become Director of the United States National Science foundation-endowed Center for Science Excellence”.

Speaking further, Ezike said that it was the love, trust and respect people have for Professor Nnaji, and the need to consolidate on the peace entrenched by Governor Ugwuanyi while bringing further development to the state that motivated different individuals to come together to obtain the PDP gubernatorial nomination form for him.

He stressed that they are giving their full support to Nnaji not only because he is the most qualified for the job, but he is coming at a time when all traditional rulers and Enugu state stakeholders have declared that political actors in the state must respect zoning formula for the governorship seat in 2023, in the interest of justice and fair play.

“Professor Nnaji is from Nkanu East in Enugu East Senatorial zone, and it is the turn of Enugu East zone to produce the next governor. Our current governor, Rt. Honourable Lawrence Ifeanyi Ugwuanyi is a man of peace and justice. That is why he has called on all to respect the issue of zoning”.

Ezike went further to describe Nnaji as a man of integrity, a listening servant, but loaded with wisdom and experience.

“He is a man of integrity. During his tenure as the Minister of Power, he voluntarily resigned. Such action is never found in the domain of Nigerian politicians. Only a man of integrity can do that. Nnaji has tremendous charisma which can only be found in current Anambra state governor, Professor Charles Chukwuma Soludo”.

He said that Nnaji is a great asset to Enugu people which must not be underestimated.

“Nnaji is a great assets to Enugu people, Igbo land and Nigeria at large. He is very young in the heart, an economist and the most humble servant I have ever seen”

“Enugu state is a state with great economic potentials and investment hub. With a man like Nnaji, all the hidden treasures in the State would be explored. He has vast experience when it comes to leadership, economic and trade policies. I am very optimistic that if given the necessary support, his administration would be the best because he would carry everyone along just to ensure that the state witnessed desired development”.