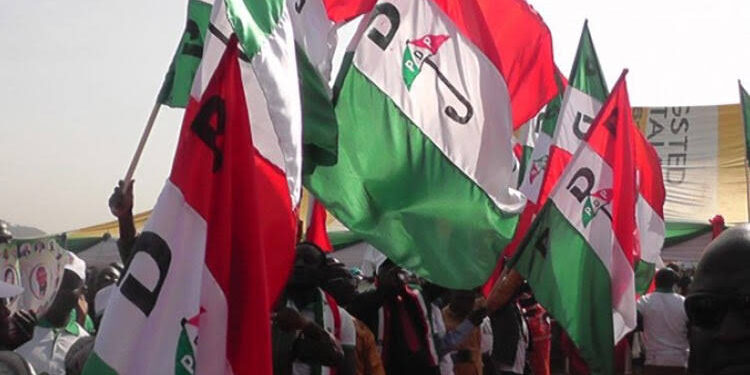 Following the adjournment of Oyo state People’s Democratic Party, PDP Stakeholders meeting last weekend, PDP stakeholders from Oyo west, Atiba, and Afijio local governments have raised the alarm over a story which circulated on Saturday evening suggesting that Oyo East had demanded the House of Reps ticket therefore, Oyo west should produce the state assembly candidate wondering how sponsors of the purported story arrived at such conclusion which was labelled baseless, unreasonable, and a figment of the authors imagination.

The party stakeholders in their reaction stated that contrary to the purported story which was said to be sponsored by known individuals in Oyo East, described it as a calculated attempt to peddle falsehood in order to mislead critical party stakeholders, party members, and the leadership of the party in the state that Oyo west PDP stakeholders demanded for the state house of assembly slot and would support an Oyo East House of Reps arrangement. They added that there was no iota of truth in the purported story adding that at no time did such meeting held nor such demand made by anyone.

The angry PDP stakeholders while reacting today (Sunday), described the story as utterly lacking in the smallest atom of truth noting that such lies are undeserving of anyone’s attention stressing that the story is both an act of irresponsible journalism by the online medium to put out such fabricated lies without verification and also an act of dirty politicking by the sponsors of the story, demanding for details of such meeting if it truly held.

They maintained that since the Senatorial slots has been tactically ceded to Oyo East, it would be a political suicide for PDP to also cede the House of Reps to same Oyo East affirming that a workable arrangement is for any among Oyo West, Atiba, and Afijio to produce the House of Reps while Oyo East produces the Oyo East/West State Constituency alongside the Senatorial slots.

Recall that it was earlier reported how Governor Seyi Makinde had called for a PDP Stakeholders meeting at the Agodi Government House last weekend with the view to addressing salient issues within the party bothering on candidates selection approach to be adopted as well as other sundry issues within the party ahead of the 2023 general election.

At the end of the marathon meeting which had in attendance expanded party stakeholders from across the state, Governor Makinde was said to have told members that the party prefers to adopt consensus approach in selecting its candidates in order to avert any unpleasant aftermath in the event of a direct primaries after which the meeting was adjourned and party stakeholders urged to go back home and work on sharing arrangements with the view to arriving at consensus candidates before the stakeholders meeting reconvenes.

While political permutations and consultations continue among political gladiators, party stalwarts and various political aspirants in the PDP across all the 33 local governments, a story which circulated Sunday evening suggested that Oyo west PDP stakeholders demanded for the Oyo East/West State Constituency slot.

Reacting, the stakeholders described the purported story as dirty politics taken too far. The Oyo west PDP stakeholders accused the Executive Chairman of Oyo East Local Government, Honourable Saheed Arowosaye otherwise known as AROSAD and one Ademola Santos as being brains behind the fake news, calling on Governor Seyi Makinde and the leadership of Oyo state PDP to immediately caution the council chairman against heating up the polity.

According to the stakeholder who do not want their names in print because of the sensitive nature of the outcome of the last PDP stakeholders meeting held at the instance of the Governor, the story was not only sheer falsehood and misleading but also a calculated attempt by the sponsors to impose a new All Progressives Congress, APC Decampee on the party.

They accused AROSAD’s of hobnobbing with an APC member who was part of the sacked Oyo ALGON members that fought Governor Makinde tooth and nail and only recently decamped into the PDP after receiving his part of the largesse. They stated that the AROSAD’s action is tantamount to what they called “pull it down if not my way tactice” explaining that the council chairman, frustrated by the Governor’s directive which advised all serving executive chairmen aspiring to contest federal house of representatives seats to forego such ambition and let other party members also have their own opportunities in the party.

The stakeholders who stated that it was almost clear from all indications that Makinde’s former Chief of Staff and a three time senatorial candidate, Chief Oyebisi Ilaka, who hails from Oyo East would clinch the party senatorial ticket considering the sharing arrangements and permutations added that it is politically impossible for Oyo East to take both the Senate and House of Reps whIle Oyo West, Atiba and Afijio were left with a paltry state House of Assembly as being sponsored by AROSAD and his cronies.

They appealed to Governor Seyi Makinde to immediately call AROSAD and his allies in the APC and new decampee to order in the spirit of peace stressing that the Chairman should not mistake the respect for Governor Makinde’s preference for him during the last local government election to translate to political popularity warning that any attempt to scuttle the ongoing consensus arrangements among party elders, leaders, and stakeholders in the zone would be fiercely resisted.