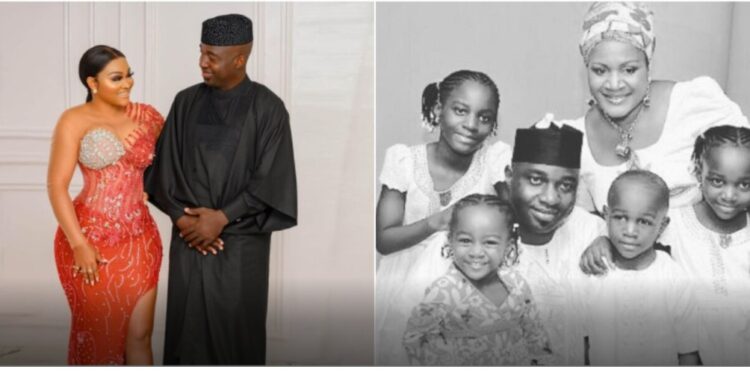 Earlier on Sunday, it was reported that Nollywood actress Mercy Aigbe secretly tied the knot with her married lover Kazim Adeoti aka Adakaz and owner of Ibaka TV in a Muslim marriage ceremony.

Kemi Filani reports that Adekaz who is previously married with four children, abandoned them in Minnesota, Canada after he begun dating Mercy Aigbe.

Confirming their secret Nikkah/wedding ceremony moments ago, Mercy Aigbe who now calls herself Hajia Minnah shared a photo from their prewedding shoot on Instagram with the caption “It’s my Boo’s birthday in a bit Cc @kazimadeoti thank you for being amazing “

Interestingly, photos of the wife and kids that Adekaz reportedly abandoned in Minnesota have now surfaced online.

15 years old boy melts Mercy Aigbe’s heart
According to Gistlover “: Hello tueh tueh, Vawulence Headquarters I fear una ooo una make a whole mercy for Dey wish her married gbola ontop WhatsApp, she nor fit wish am on Instagram she know say una go scatter her page as we don post this one now, una go see say she go run wish am, wait on it, flaunting Married men in WhatsApp. According to our source sef, as the man wife no Dey naija again, them don do nikkai for mercy codedly , una go Dey do film to advocate say make people no ruin homes, but Na una Dey ruin homes, it is well oooo, i come in peace , Mercy iyawo D owner, Adekaz. Igi pawpaw oni wo luwa ooo”

The action has sparked mixed reactions from netizens.

Mercy Aigbe narrates why she felt Sola Sobowale wanted to kill her acting career
One Sam wrote “An already married man with kids. They will go abroad, suffer with their wife. After making the money,they will come back to Nigeria, come they follow all these Jezebels around. If anything happen to them,people go dey pity them. I tell you, it’s not everybody that worth your tears”

‘Love is sweet’ Mercy Aigbe considers giving marriage another shot
One Wemimo wrote “No man is worth Sacrificing for,women wake up”.