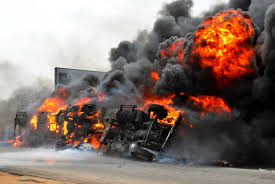 A tanker laden with petrol fell , and spilled its content near the  Nigeria Television Authority ( NTA) , Agodi , Ibadan , causing a deafening explosion on Thursday night.

The incident which occurred at about 8.20pm , sent motorists , passersby, and people in residential buildings scampering for safety .

Hundreds of people were seen far off gazing at the pillows of fire , while road users made u-turn to avoid been trapped in the fire.

As at the time of filing this report, fire fighters from the state government Fire Service are busy battling hard to put off the raging fire .

It had not been confirmed if there are casualties when this reporter got to the scene of the incident.

The fire which destroyed properties worth several millions of naira came as a result of brake failure , according to an eyewitness account .

Electric supply was said to have been affected as wooden poles were burnt by the inferno .