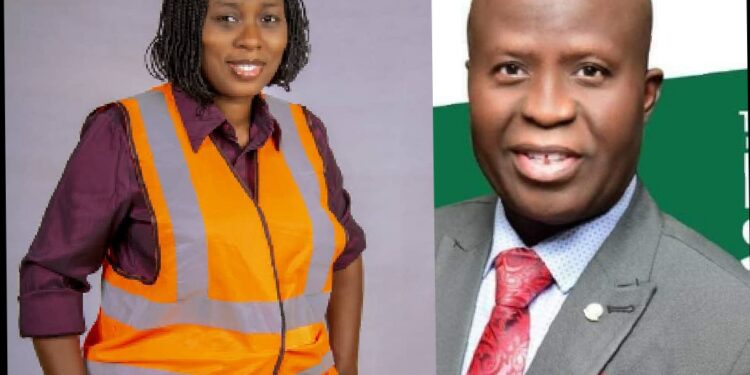 578
SHARES
1.3k
VIEWS
Share on FacebookShare on TwitterShare on WhatsAppShare on Telegram

Federal University Oye-Ekiti (FUOYE), celebrates her staff member, Engr. Folasade Olusola Adebayo (nee Agbeleoba), who has successfully navigated the various stages of engineering endeavours to clinch the most prestigious award in the field as a Fellow of the Nigerian Society of Engineers (FNSE); the first female to attain that echelon in Ekiti State.

Engr. Adebayo is currently FUOYE’s
Deputy Director of Physical Planning, and she has been performing excellently well in her capacity.

A statement made available to newsmen in Ado-Ekiti at the weekend, signed by Wole Balogun, Special Adviser on Media Matters to the VC, disclosed that afer graduating from the then University of Ado-Ekiti now Ekiti State University, Ado-Ekiti, Engineer Adebayo started her carrier as a Civil Engineer at the Ajaokuta Steel Company where she rose to the level of Principal Engineer. Her impact during this period beat the imagination of whoever had it in mind to undermine any lady in the profession of engineering. She joined the service of the University of Science and Technology, Ifaki-Ekiti as a Principal Engineer heading the Department of Works. Being a newly established University, the task of ensuring quality structures with brazing architectural acumen rested on her and her new office.

Her impact was felt until the merging of the institution with the Ekiti State University, Ado-Ekiti. It was at this point Engineer Adebayo decided to join the service of the Federal University Oye-Ekiti in 2012. Yet a newly established institution, Engineer Adebayo became a round peg in a round hole in order to provide professional expertise in building structure and maintaining the University.

Engineer Adebayo has won commendations of Ministers of the Federal Republic of Nigeria at different levels based on the various construction works she has supervised. A Master’s degree holder in Structural Engineering with Ph.D in view, Engineer Adebayo became a role model for every girl hold who aspired to clinch the highest echelon in engineering profession when she was unanimously elected as the chairperson of the Association of Professional Women Engineers of Nigeria (APWEN), Ekiti State Chapter, the position she holds till date.
FUOYE is proud to celebrate this iconic figure and a great inspiration to out teeming female students.