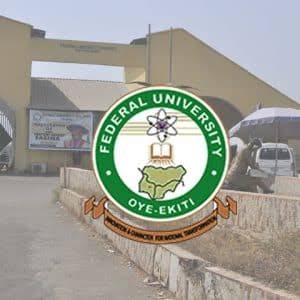 The Federal University Oye-Ekiti (FUOYE) has described as untrue, false and libelous a news report making the rounds that the Ivory Tower is one of the federal varsities allegedly planning to increase school fees in view of the call for more University funding by stakeholders.

A national daily had reported on Saturday that some federal universities are currently considering raising tuition fees for students amidst cries for increased funding of the institutions.

The report reads in part: “…some federal universities are currently considering raising tuition fees for students amidst cries for increased funding of the institutions, investigations have revealed.

But in a swift reaction from FUOYE management, the Vice-Chancellor of the institution, Prof. Abayomi Sunday Fasina, through his Special Adviser on Media Matters, Wole Balogun, described the inclusion of FUOYE among the list of the federal varsities allegedly planning hike in tuition fees as false and strange.

Balogun’s statement, which was made available to newsmen in Ado-Ekiti on Saturday reads in part:
“The attention of the management of the Federal University Oye-Ekiti (FUOYE) has been drawn to a report in a national daily alleging that FUOYE was among the federal varsities planning a hike in their school fees and we strongly debunk such news and describe it as strange and untrue.

“The tuition fees in various faculties of the institution have remained as they were several sessions ago and there is no such plan to increase them. This truth can be verified on the university websites and various portals designed for students’ registration and which can be assessed via www.fuoye.edu.ng.

“We therefore urge our prospective and recently admitted students not to panic as such news of alleged fees’ hike is strange and untrue and should therefore be discarded.

“The general public is also urged to ensure that they verify any news involving our great citadel of learning from our official website before they believe them or not, ” he said.