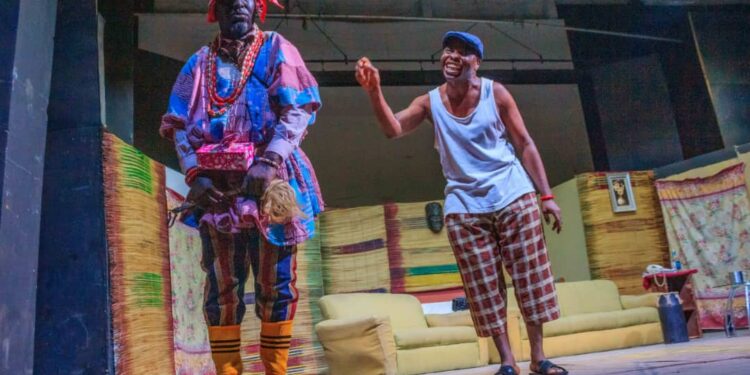 Several years ago, the theatre, that is, stage performances defined the authentic art of entertainment in Nigeria. It was a period that had theatre troupes as the major forces to reckon with when it comes to entertainment across the country. The troupes travelled from place to place putting up performances in market squares, town halls and every available space and the audiences were in the legions. The period birthed many that will eventually become the reference points in the Nigerian film and cinema culture. These include Hubert Ogunde, Oyin Adejobi, Ade Afolayan (Ade Love), Duro Ladipo, Moses Olaiya (Baba Sala), Kola Ogunmola and several others. The founding of Mbari Mbayo art movement and the collaboration of the academic theater and the itinerant troupes known as Alarinjo Theater movements added impetus to the already vibrant theatre culture across the country especially during the late 1960s and the 1970s. Somehow, the fire died!

So many reasons have been advanced for the comatose state of stage performances in Nigeria and these include the emergence of the cinema culture and home videos, limited funding and insecurity. However, given that the cinema culture itself was in limbo for many years and access to online platforms of entertainment has equally dealt with home video entertainment, one may infer that lack of or limited funding is the biggest impediment to the resurgence of stage performances across the country. This is because in spite of the precarious state of security in Nigeria, people still troop to the cinemas to watch the afterhours shows and ongoing experiments in parts of Nigeria especially Lagos State have shown that with adequate publicity where funding is available, people will watch stage plays.

It is in the context of the above background that the initiative of Government College Ibadan Class of ’89 old boys is commendable. The class has boldly taken up the gauntlet to stoke the fire for the awakening of live theatre performances in Ibadan and across the country. This was made known to the general public at the just concluded theater festival held by the class set during the Christmas holidays. The set produced Femi Osofisan’s ‘The Engagement’ sponsored by a member of the class Pastor. Olusegun Onayinka to honour his father Gbegande Olusegun Onayinka who was an old boy of the Class of ’62. The Executive Producer while speaking at the event noted that Ibadan is where it all began as Ibadan was the home of theatrical activities in the past and the home of the first University in Nigeria which equally birth the first theater department in academics in the country.

The Chairman of the set Tolulope Fadulu further spoke on the importance of Ibadan and GCI in the desire to reignite passion for the patronage of stage performances in the ancient city. The Chairman in his welcome brief observed that no school has produced as many literary giants as Government College Ibadan. According to him, the school has the enviable record of grooming:
Cyprian Ekwensi – Novelist
T.M Aluko – Novelist and poet
Wole Soyinka – Africa’s first Nobel Laureate in Literature
Dapo Adelugba – Critic, Theatre Academic, Director and Actor
Banwo Smith – Art enthusiast
Femi Osofisan – Playwright, Poet, Essayist and Theatre Academic
Bode Sowande – Playwright and Theatre Academic
Yanju Adegbite – Broadcaster, Actor and Filmmaker
These have all being followed by several other young generations of GCI old boys doing well in the arts and entertainment industry. Therefore, the vision as the chairman remarked was not only to entertain families during the holiday seasons but to also inspire and encourage the young audiences to tap into their hidden potentials and maximize their talents in any form or ways that will be beneficial and productive.