Omisore was not imported from PDP to cause crisis in APC – Hon. Odebunmi 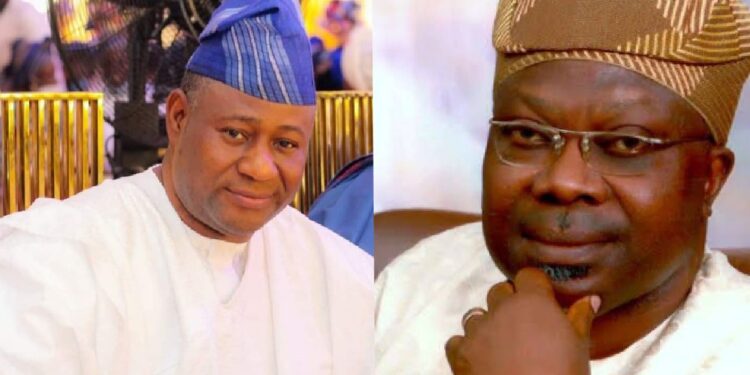 A chieftain of All Progressive Congress who doubles as the chairman Oyo state caucus of members of House of Representatives and Chairman House committee on information National Orientation Ethics and Values, Hon. Segun Dokun Odebunmi has debunked the insinuation making the rounds that the newly elected National Secretary of the party was imported from the Peoples Democratic Party to cause disharmony within the ranks of the ruling APC.

He described such reports as baseless and lacking in knowledge. It was a calculated agenda of the orchestra intended to distract the national secretariat of our party from focusing on the coming 2023 national elections. He described Omisore as a thoroughbred progressive who played a significant role in the formation of the now defunct Alliance for Democracy.

Bunvic who represents OgoOluwa/Surulere Federal constituency, opined that at the return of democracy in 1999, the then AD relied heavily on the political structure of Senator Iyiola Omisore and the credibility of Baba Akande to ensure that the party wins all the available seats, including the governorship election in Osun state. This was well captured by Baba Bisi Akande in an exclusive interview he granted the City MirrorNews in 2016.

He observed that while it is true that Iyiola Omisore had a checkered history with progressive politics and was later to become an outcast for daring to be different, it is also honest to admit that he has rendered important services to the progressive family that history cannot look away from. This is despite being subjected to scornful and derisive treatment for several years from the leaders of the ruling party, particularly those from the south west where he is from. He was alleged and later acquitted of murder offense. He was also carelessly accused to have a totally different ideology guided by self interest, different from that of the progressives. Bunvic insisted that all these were the handiwork of his distractors who were afraid to stand in competitive politics with him. Hon. Odebunmi insisted that Mr. Omisore did not begin Nigeria’s recent political journey in the bad books of the progressive. His towering political structure and enviable profile has been such that he continues to stay relevant on all platforms of purpose.

Admittedly, he was pivotal in the runoff election that returned Gboyega Oyetola as governor. This was after the independent National Electoral Commission declared the September 22, 2018 governorship election inconclusive on the ground that the 353 votes margin between Ademola Adeleke and Oyetola was lower than the number of canceled votes (3,498) in seven polling units which fell in Omisore’s stronghold. He rejected all entreaties from the PDP and its candidate and rather worked tirelessly to ensure Oyetola’s victory. It is instructive to note that he also actively participated in the election as a candidate of the SDP.

Aside from Omisore’s rich credentials, he was born into a royal family in Ile-Ife, where he also grew up. He is the son of Oba David Olajide Omisore and the grandson of Lowa Omisore, both of Ayepe, Olode. He also has extensive experience and strong academic background to man our party secretariat. He was a former Deputy Governor and Senator of the Federal Republic of Nigeria. He was chairman, Industries, culture and Tourism committees of the senate, and later Federal Character and Intergovernmental Affair, Navy, communication, and Appropriation. He was also a member of the UND/PINASS Support Implementation Committee.