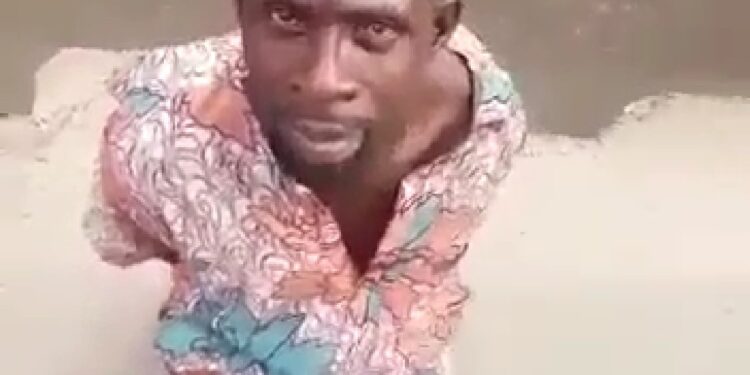 An Ibadan-based kidnapper, identified as Temitayo Olafisoye, who specialises in abducting children, has been apprehended in Lagos State.

This was revealed on Monday in a trending social media video that showed the suspected kidnapper being quizzed.

Olafisoye is seen in the video kneeling with his hands tied to his back while he narrated how he carries out his operations.

It was learnt that the suspect and his accomplice, identified as Kayode Akinola, who is presently on the run, were caught by community members of Omole Estate in Ojodu-Berger area of Lagos State.

According to Olafisoye, who is based in the Sango area of Ibadan, Oyo State, he and his accomplice kidnap children in Lagos and take them to Ibadan to use for money rituals.

When asked how many children he and his accomplice had kidnapped, he could not give an accurate figure, but stated that they have abducted many children in various areas of Lagos, including Berger, Iyana-paja, Ikotun and Iyan-Iba to mention a few.

Giving details on how their victims were abducted, he stated that he and his partner would always drug the children to put them to sleep.

According to him, when they purchase the sleeping tablet, they then mix it in a plastic bottle with water from the gutter and administer it to their victim who then falls asleep.

Many injured as bandits bomb Kaduna-Abuja train with over 1,000 passengers aboard