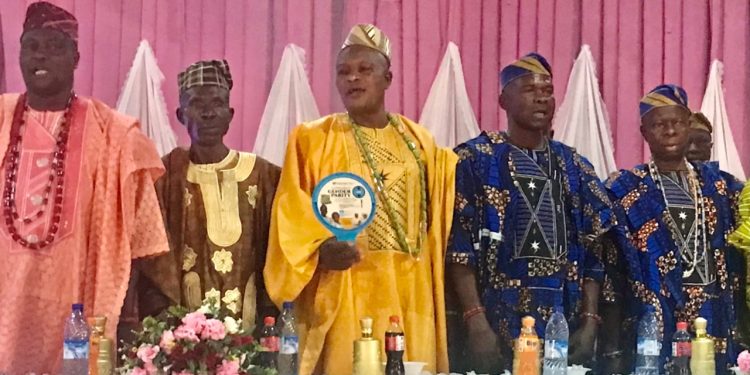 The people of Iseyin have given assurance of their readiness to vote en mass for the incumbent governor of Oyo State, Engr. Seyi Makinde during the 2023 election.

The head of the Iseyin Traditional Council, High Chief Ismahil Odubiyi gave the assurance on Friday in Iseyin during the distribution of free sanitary towels, drugs and other hygiene materials to female students of Iseyin District Grammar School, in Iseyin.

The programme which was held at the main hall of the school was attended by the wife of the Governor of the State, Engr. (Mrs) Tamunominini Makinde, member of the State Advisory Council, Senator Monsurat Sunmonu, the State Commissioner for Special Duties, Alhaja Faosat Joke Sanni among other dignitaries.

Odubiyi described the founder of the organization that put up the event, Women’s Organization of Resources, Knowledge and Skills (W.O.R.K.S), Mrs Titilayomi Ahmadu as a unique daughter of Iseyin community that has impacted very well in the development drive of the indigenes.

He went on to say that the incumbent administration in Oyo State under Engr. Seyi Makinde has changed the face of Iseyin community for the better through various infrastructural developments like reconstruction of Moniya-Iseyin road, about-to be-completed Iseyin-Fapote-Ogbomoso road and the Oyo-Iseyin road that is under reconstruction.

He went further to highlight the achievements of the governor in Oke-Ogun and Iseyin to include the establishment of the College of Agricultural Science and Renewable Natural Resources of the Ladoke Akintola University of Technology, Ogbomoso (LAUTECH) in Iseyin, saying that the people of the community would pay back by standing with the Governor during the coming election by voting for his second term in office.

“Iseyin has one peculiarity in being united to vote for a candidate that stood with them in their time of need, we shall also stand with Seyi Makinde come 2023.

“I am delighted that Her Excellency could find time to attend this event which is dedicated to the future of Iseyin, our girls, Mrs Titilayomi Ahmadu has shown the age-old proverb of the Apple not falling far from the tree, she is a replica of her father, late Pa Okediran, we appreciate you for giving back to the girl-child.”

The wife of the governor, Engr. (Mrs) Tamunominini Makinde while responding, said she was happy to be in the midst of happy students and a community that appreciated the good work of her husband as the governor of Oyo State.

She enjoined the female students to take their hygiene serious, especially in the process of maintaining a healthy menstrual period while giving kudos to the donor whose birthday coincidentally fell on the same day.

“I shall deliver your message to the governor that you promised to pay back with votes, what he has done for the Oke-Ogun and Iseyin people.

“The celebrant has made available today, a special training on hygienic menstrual exercise as well as presentation of free sanitary towels, drugs and other materials to five hundred female students of this school, we salute you for this gesture.

“I am happy to be part of the mentoring session and believe our students will be motivated by this kind gesture to study hard to be a better person and good ambassadors of Iseyin and your families.

“Study hard and be successful among other women you shall be meeting in your future, come back and also make impact on those coming behind you.

“I thank you, Mrs Titilayomi Ahmadu for this opportunity for giving back to the community and the girl-child, we celebrate you on your birthday and pray for continuous prosperity.”

The celebrant, Mrs Titilayomi Ahmadu appreciated the dignitaries, especially the wife of the governor, for creating time for the welfare of the girl-child and community development, saying the special menstrual hygiene session and distribution of free sanitary towels would be replicated in other public secondary schools in Iseyin.

She said the idea to equip the girl-child with orientations about menstrual hygiene came up because of rising cases of diseases caused by poor hygiene during menstruation.

She enjoined the female students to spread the message of simple hygiene, especially during their menstruation, as a healthy girl-child is a precursor to a healthy future of the community.

Highlights of the events apart from the distribution of the free sanitary towels include cutting of cake and cultural dance.