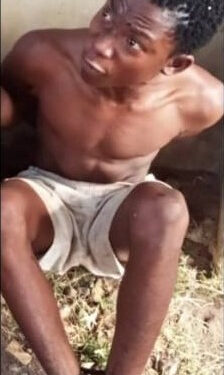 One Taofeek Isah has been sentenced to death by hanging by an Edo High Court sitting in Auchi for kidnap, gang rape and torture of a 20-year old woman, Blessing Ezekiel, with harmful substance.

Three others were sentenced to jail terms ranging from four to 19 years.

The four convicts are identified as Taofeek Isah, Jeremiah Okamudu, Godwin Adeyemi, and Miracle who were brought before the court on a five-count charge of rape, kidnapping, attack with harmful substance, inflicting physical injury and unlawful trial by ordeal.

Justice Imoedemhe held that all the evidence tendered before the court convinced him beyond reasonable doubt that the 1st, 2nd and 4th defendants were guilty of the charges.

Imoedemhe ordered that Taofeek Isah be sentenced to death by hanging while the other convicts be taken to the Auchi Correctional Centre to serve their jail terms.

The lead prosecutor from the Edo State Ministry of Justice, Clement Eseigbe, had during the trial, submitted that Isah connived with three of his friends to kidnap, gang rape and grievously assault a 20-year old Blessing Ezekiel.

The prosecutors said the defendants committed the offences on October 22, 2021, at Okpella community in Etsako East Local Government Area of Edo State.

“The defendants did rub pepper into the vagina of Blessing and inflicted physical injury on her by beating her with a cutlass, wood and other dangerous objects,” another prosecutor, Adekutu said.

The offences committed “are contrary to Section 4 and Punishable Under Section 5 (1), (B), Section 25 (1) of the Violence Against Persons (Prohibition) Law 2021.

Reacting to the verdicts, representatives of BraveHeart Initiative’s (BHI) for Youth and Women expressed excitement.

The NGO workers provided comprehensive support to the survivors in the case and applauded the judgement.

You must grab, snatch power at all cost, Tinubu charges his campaign operatives in a video (Watch)

You must grab, snatch power at all cost, Tinubu charges his campaign operatives in a video (Watch)