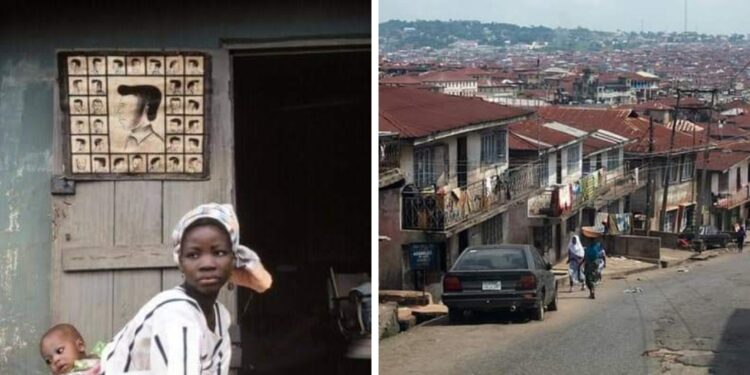 This afternoon, I’m sitting on the bank of a river somewhere around Nigeria’s geographical confluence, but, by some cinematic phantasmagoria, I’m also in Ibàdàn—–inside my maternal grandma’s neighborhood, Abébì.

In the heart of the neighborhood, Soosi elèja stands akimbo, after decades of turbulence, its fading surface already in sync with the colour of the sky, its huge pillars unperturbed by years of a zillion hossanah cries, dwarfed in height only by the almost dilapidated 3-storey building beside Agboole Olósun.

In Abébì, somewhere adjacent Sóósì elèja lies a narrow path that leads to Olóóso’ko, from where grandma brought our culinary delight, Mòní-mòní.  Olóóso’ko, the corrupt version of Olóósà-oko, was where Mufu, the notorious armed robber, loomed. Back in the day, on the few occasions I accompanied grandma to Oke-Sápàtì (corrupt version of Shepherd’s Hill) while holidaying in Ibadan, each time we drove past Òópó Yéosà, just before negotiating our ways around Olóós’oko junction, she would point in the direction of Mufu’s family compound, with characteristic dread. Ah, Mufu Olóós’oko, the demon whose name sent jitters down the spine of everyone, friends and fiends alike.

I am transported beyond my immediate space this afternoon by pictorial images from this Yoruba flick I am watching for the umpteenth time, shot partly in my maternal grandma’s area in Abébì, Ibadan. And from the very spot our late Mogaji, Baba L’òòdè-n-sálè, often placed his beloved chair – Àgbà-n-tara – all the way to the  erosion-ravaged pathway that leads to Ilé Alàwò, the cameramen seem possessed by this mischievous but fascinating craze to reinvent my childhood years, a bitter-sweet wave of sensation sweeping through me. Every shot, every angle, every scenery, is an emotive reinvention of my early years in the neighborhood.

Soosi Eleja, back in the day, was a prominent part of  everyday life in Abébì: it stood behind the neighbourhood’s Sálángá ‘joba—our oft-abused public toilet. It was rivalled in prominence only by Soosi Onígadà, another church located along the semi-tarred road that connects our area with Òke’-páádì, where the burial rites of the late star actress, Bisi Komolafe, were held. Of course there was Mosalasi Alhaji Alíìwó, which for us served the dual purpose of Quranic school and Muslim praying ground.

And then there were humans who influenced the flow of events in the area in those years, like Nureni Kilanko, the old man with skin the colour of Sapodilla, whose house-proudness we all despised as pretentiously elitist. Kilanko had the only Black-and-white television set in the neighborhood, from which we watched Fópomóyò, and his children lived amongst us like kings.

He had a companion in Kówópé, our old barber who seemed to derive some fiendish joy in scraping the edges of our hair with nonchalance whenever we arrived his shop with half the amount of a standard haircut tip, while turning his chair (Shia Barber) violently as though a barbing experience  isn’t complete without an extra feeling of dizziness.

Òke’-páádì is a stone’s throw from  Agboole Idi’gba, not far away from the performing ground of Ògbònkoko, the famed masquerade.

With the benefit of insight, I realise now that this teenage exposure would shape my appreciation of performing arts in no small way, both as a journalist and culture enthusiast.

I am watching this flick now and I am overwhelmed by this nostalgic desire to journey into the past, into those years of innocence, of faint consciousness.

And with this fantasy, this nostalgic feeling, I choose to conceive our beloved Abébì area of Ibadan NOT as an actual geographical space, but as relics of a past, as cute scars engraved on our chests by time, with which we move around the world.

I’m a child of nostalgia; and I wear memories of Ibadan like a designer suit everywhere I go – whether on the river banks in Dakar, or inside Tro tro in Accra, or in the crowded streets of Central London, or in the middle of green vegetation in Suburban Pennsylvania, or amid the maddening chaos of Lagos traffic. No human feeling beats the Ibadan nostalgia, you know; not even the sweet sensation of post-coital adventure.

In a sense, I think of these beloved spaces (Abébì and Ibadan of the 1990s) as a series of conflicting items compressed into a little parcel, small enough to be kept neatly in a pouch, and taken far away from itself, from Abébì, and far far far away from Ibadan. Or, yet again, as cute graffiti, mere artistic inscriptions, permanently etched on the surface of our memory.

So as I type this, I am not in Ibadan. Yet, together with its beautiful scenery and fascinating places and easy life of the early years and long-dead awesome people like Baba L’òòdè-n-sálè and Kilanko and Kówópé, Abébi, and indeed Ibadan, are here with me on the bank of the river—–stuck permanently inside my foggy head.