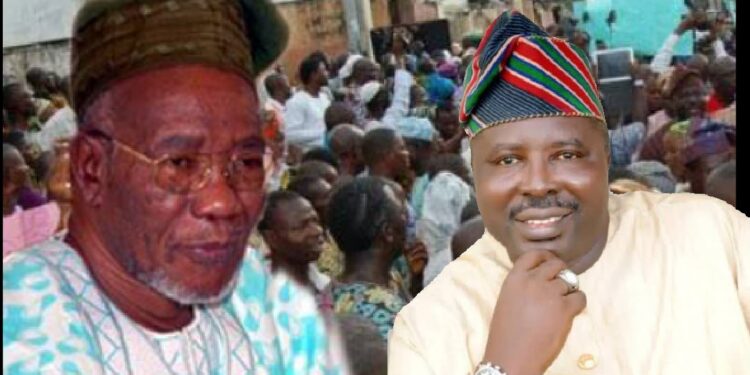 Without any equivocation, His Excellency, Alhaji Lam Onaolapo Adesina ranks among the greatest progressive politicians of note in the country.

My initial encounter was in the year 1999, when we were preparing for election.

I hailed from Ido Local Government, arguably the strongest base of Peoples Democratic Party (PDP) in Southwest due to the fact that one of the illustrious sons of the local government , Alhaji Yekini Adeojo was contesting for the governorship of Oyo-State, all politicians of note in the local government were in PDP, this include, but not limited to Alhaji Okedina (R.I.P), Alhaji T.L.Okunola (R.I.P), Baba Henry Ladipo (R.I.P), Alhaji Abolade Bello (a.k.a Labankadi), Alhaji Kamorudeen Ajisafe (a.k.a Baba Adeyoyin), Alhaji Babalola (who later crossed to AD before the gubernatorial election), Baba Olugbode, Alhaji Kola Oyebamji (two-times Council Chairman and Former Commissioner for Lands and Housing),Alhaji R.O. Bukola (R.I.P).

Among the younger folks of PDP strong members then were Hon. Isiaka Adeola (who became two-times State Honourable and Minority Leader during the regime of Great Lam), Alhaji Okedina, Hon. Kamoru Gbadamosi, Musibau Emiola (a.ka.Emma), the host of “Jackson five” .

(Clearly the names are not exhaustive those whose names have not been included should pardon me, it was not deliberate)

Going back to the initial narration,

“We said Great Lam should hand over party matter to us, he smiled and said, who took it from you before, you had the first  election – Local Government election, you lost in Ido, you had State Assembly election, you came to me that, it was because you didn’t have money, for gubernatorial election, we gave you money , gave men to assist you, you lost again. If there is any magic you want to do for Presidential election, go and do it”.

Luckily we won, the presidential election in Ido but it was irrelevant because PDP’s Chief Oluwasegun Obasanjo won the election nationwide.

Great Lam did not punish us in Ido Local Government for our failures in the election, he still appointed some of us into political offices.

Luckily, Dr. Ogunmola from Oyo town, did well in the interview, he was so appointed.

The third encounter, was when we wanted to have a by-election at Akufo, because the former Councillor died while in office. We worked tirelessly, the Governor then, Alhaji Lam said “Dr. Olowofela, mo ri e o, onse ise Erin, o si n je ije eliri, Ojo nbo loluwa wi”

Meaning that “Dr. Olowofela, I see you, you are working like an elephant, but we compensated you with rat portion, your own time will come”.

I need to state that PDP still won the Councillorship rerun! while the Governor of the State was an AD Governor, Lam was a democrat per excellence.

The fourth encounter was when, I went to him, that If AD was ever going to win in Ido Local Government, we have to bring on board, some of the Leaders of PDP, he then asked me like who?

I said Alhaji Ajisafe, Alhaji Okunola, Kola Oyebamji , among others, because these people are masters of the game. He replied, ” Ma da Kamo (Ahaji Ajisafe) lohun, Omo mi ni” – He said “don’t mind Kamo (Ajisafe) he is my “son”.

Subsequently, he invited Alhaji Okunola, Alhaji Ajisafe, Alhaji Kola Oyebamji and have a gubernatorial discussion with them.  They all decamped to AD-the Party  was fortified in Ido Local Government and we were winning subsequent elections .

The fifth encounter was during the launch of Democracy News by Progressive Youth  Front – PYF  under the leadership of Wole Abisoye. Bola Akinyemi was the Secretary then.

PYF was like the youth vanguard of AD then.

Great Lam launched the magazine successful, we seized the moment to beg for reinstatement of one of us who had been sacked with host of others at The Polytechnic, Ibadan on account of incessant Union Crisis, Engineer T.G. Fawole.

Great Lam was furious that day, he said Fawole was among the youths that help  secure votes for AD, but his unrepentant attack using the Union was unbelievable.

I need to state that PYF members are scattered in various political parties in the state today.

But the bond of brotherhood, is still sustain till today. Anywhere you see any member, once you say P.Y.F , Great will be the answer.

The sixth encounter was in 2002 when there was jostling for Senatorial election (Oyo-South).

The main Contenders that time were Senator Peter Adeyemo (a.k.a Jesu o Se) the incumbent Senator then,

I was then the Party Chairman of AD in Ido Local Government. All our leaders had one candidate or the other, they were routing for. I need to state that , I was very close to Senator Peter Adeyemo – a good man, he served the people diligently but failed to manage the political class well.

I later went to Alhaji Lam, that whom should we support for the Senatorial election, he answered that all of them are his children. I insisted that whom do you prefer to be the flag bearer, confidentially, he said in a low tone Ajimobi. That was the beginning of my relationship with Senator Ajimobi and the Ajimobi family up till today.

His Excellency, Alhaji Lamidi Onaolapo Adesina was a great man , a visionary leader, builder of men,  I cannot forget your love and support for me.

May your soul rest in peace.