NANS protests over EFCC’s alleged harassment of Makinde in Ibadan 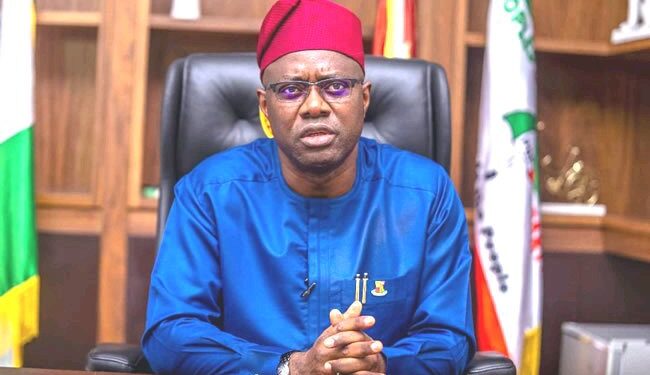 The National Association of Nigerian Students (NANS), on Wednesday, staged a peaceful protest in condemnation of alleged harassment and intimidation of Governor Seyi Makinde by the Economic and Financial Crimes Commission (EFCC).

The student’s body led by Comrade Adeleke Abidemi stormed the Ibadan office of EFCC and warned the Agency to leave the governor alone in order not to incur the wrath of the students.

NANS argued that the arrest and detention of the State’s Accountant General, Mr Gafar Bello, was on called for.

The arrest, according to the Union is aimed at distracting Governor Makinde from continuing the good works that he is doing in the state.

The union which had earlier passed a vote of confidence on Governor Makinde”s administration for transparency and accountability warned the EFCC to desist from illegal arrest and detention of government officials from the South-West.

He said: “We are here today to warn the EFCC. We have been working hand-in-hand with them for a very long period of time. But today, we are going totally against them as this is just a warning. They need to stop the illegal arrest of our people in the South-West because the zone has not done anything bad to them. So, we are here to say enough is enough.

“We want them to leave our Governor alone because he is doing well. He is not corrupt and they should leave him to continue to do what he has embarked upon.”

Speaking in the same vein, the former president of the National Association of Polytechnic Students (NAPS), Benedict Olalere, queried what it described as the unjust arrest of government officials by the EFCC.

Olalere wondered why the EFCC is moving against only Governor Makinde as if he was the only governor spending security votes.

He, thereby, warned the EFCC against playing politics with its job.

He submitted that the agency has goofed with the arrest of the Oyo State Accountant-General.

“I always like to stand for nothing but the truth. I don’t compromise and you cannot buy me.

“I remember that during the issue of the Twitter ban by the Federal Government, I was the only one who stood by the FG because of my conviction. I believe Nigeria is a sovereign country Twitter needs to respect. But now, the FG has goofed. EFCC has goofed and it has spoiled his name and integrity.

“We so much trusted them before but they have now become political tools in the hands of politicians. An election is fast approaching and we have seen a move and nobody is talking about it, but we Nigerian students in the South-West have taken it upon ourselves as a cause and a cross. We will not allow anybody to nail our leaders again; to destroy the image of the South-West again.

“Why is it that in the North, you saw a governor pocket billions of Naira and EFCC did not go after such a person? The video even went viral then. But now, a governor who is performing well in Oyo State, the EFCC went ahead to arrest the Accountant-General of the state unconstitutionally, though they have released him.

“We are here to let them know that if they continue in this mess, we will come out with #EndEFCC in Nigeria. The protest is going to be more coordinated than #EndSARS and they won’t be able to stand it.

“So, we have come to pass our vote of confidence in Makinde, that he is not a corrupt governor, and to let the EFCC know that it should stop the illegality in South-West and Oyo State.”

NANS protests over EFCC harassment of Makinde in Ibadan