Nigeria on a slow journey to VENEZUELA| By Anonymous 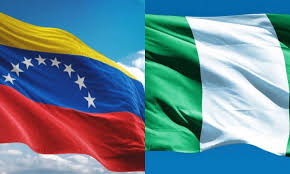 A SLOW JOURNEY TO VENEZUELA

Venezuela is suffering an unprecedented man made humanitarian disaster. It resembles a country at war and some of their major problems include extreme food and medicine shortage, rampant crime, and constant electricity blackouts.

Some of these problems resemble another country I know.

Venezuela is experiencing what Economists describe as an extreme case of hyperinflation. In this case, the prices of goods double every 26 days. One source reported that a cup of coffee cost 450 Bolivares in 2016. By 2019, the same cup of coffee was a shocking 2.5 million Bolivares.

90% of Venezuelans live in poverty and their currency is practically worthless. The poor citizens have to rely on the barter system to get what they want while the rich ones use the US dollar.

But it was not always so…

This resembles another Giant of a continent I know.

Forget Russia and Saudi Arabia. Venezuela has the largest oil reserves on earth. Over 18% of the world’s reserves are in Venezuela. Leaning on it’s oil industry and exports, she became richer and richer in the 1960s.

This resembles the phenomenon described as the oil boom of the 1970s in another country I know.

Because of this exteme wealth, Venezuela fell into what is described as a RESOURCE CURSE. This happens when a country fails to diversify it’s economy, relying heavily on one resource. Instead of using the oil money to develop it’s agriculture or manufacturing processes, the country imported most of what it needs and pays for it with the oil money.

This resembles another country I know.

Unfortunately when a country depends solely on one resource, that nation’s future is dictated by the price and demand of that resource. This became a problem for Venezuela as in the late 1970s, the demand for oil dropped.

In 1980, oil price was 34 dollars per barrel and in 1986, it had dropped to 10 dollars per barrel. This was the beginning of trouble for Venezuela. The government was in debt. It had debts of over 33 billion dollars.

What did it do, well it turned to the IMF for loans. It started borrowing more and more money just to keep the country moving.

This resembles another country I know. Maybe it is on a journey to Venezuela.

Some of the conditions for these loans were austerity measures on the citizens. Subsidies were removed on many goods, prices went up and life became very hard for the citizens. A riot broke out in 1989 and the military intervened by shooting and killing protesters.

Sounds familiar? It resembles another country you might have heard of. Is it on a journey to Venezuela?

The situation became worse when the rich transferred their money abroad. There was a capital flight. The rich bought up US dollars and set up foreign bank accounts. It means that the wealth was no longer in Venezuela or serving it in any way.

And then Hugo Chavez happened!

He contested the presidential elections promising the citizens CHANGE!
In 1998 he was surprisingly voted into power.

When he took power, he went on a spending spree on social programs. To do this, he had to use the country’s oil profits thereby creating an even bigger dependence on oil. The social programs put some money in people’s pockets but it was a temporary fix.

Unfortunately Chavez didn’t spend any money maintaining oil facilities. This led to a slow down of production.

Chavez also failed to diversify the economy. He was a popular and charismatic leader who had promised CHANGE! So he was quite popular. He started having autocratic tendencies and thought he could do whatever he wanted. He put his friends and supporters in positions of power regardless of their expertise and expanded the military’s power and control.

Doesn’t this resemble another country that you know? A country that’s slowly moving towards Venezuela?

The final straw happened in 2010 when Chavez declared an economic war. He devalued the currency to make up for budget deficit. also, he made it difficult for the citizens to get Forex for their imports.

What resulted was the massive hyperinflation that persists today.

Chavez died in 2013 of cancer. His successor, made things worse for the economy. He ruled nu decree, he arrested opposition leaders and shut down websites critical of him.

Venezuela has the world’s largest oil reserves but citizens queue for days to get petrol in their cars. Why? There are no working refinaries. All the refined oil is imported. So people are getting rich on oil importation while the rest of the country dies of poverty.

Am I still talking about Venezuela or another country I know? It’s hard to tell the difference at this point.

In summary, Venezuela’s problems were caused by the following factors.

This formula will always produce the same result whether in Latin America or West Africa!

Any country that goes down this road is unfortunate.

IT IS ON A SLOW JOURNEY TO VENEZUELA.