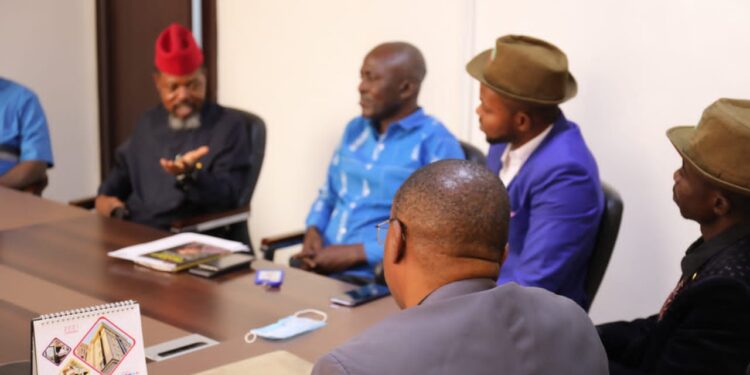 The Agency and Mobile Banking Operators, (AMBO) otherwise known as PoS operators who are the domestic unit of National Union of Banks, insurance and Financial Institution Employee (NUBIFIE), on Monday visited the Nigeria Labour Congress headquarters in Abuja for a business meeting.

The financial agents were received at the Labour House (Paschal Bafiyau House) by the Congress’s General Secretary Comrade Emma Ugbaja, Deputy Secretaries Comrade Chris (Organising and Training) and Comrade Bello (Administration) while the NUBIFIE’s delegates were led by Comrade Olusola Aboderin, Deputy Secretary to the union.

The meeting was to formally introduce the newly formed AMBO to the leadership of the Congress.

Agency and Mobile Banking Operators (POS Operators) are the major driving force in the Central Bank of Nigeria’s initiatives called financial inclusion which was introduced into the Nigeria financial markets in the year 2013. As a major objective, AMBO is the coming together of Operations to form a union body that will defend their rights in the course of doing their business within Nigeria. Most importantly, they are under the only union of working people in financial institution, NUBIFIE.

At the meeting, the financial experts discussed on how to ensure that the banking agency and her Operators in Nigeria have a trade union aid and support, particularly in the area of welfare of workforce.

The meeting agreed among other things, that the leadership of NLC will engage the stakeholders in financial sectors and the national security agency on behalf of the POS Operators on behalf of her members.