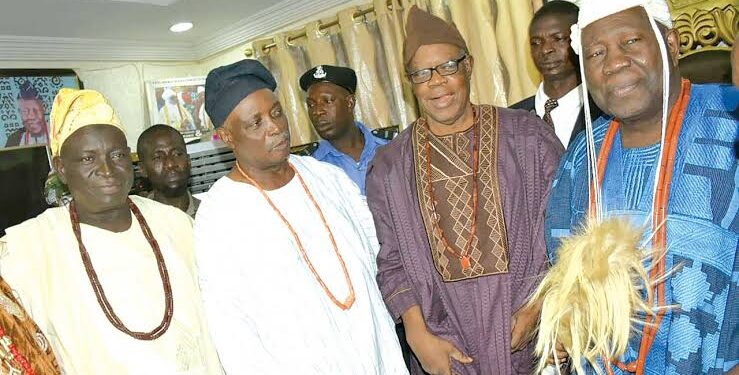 1.9k
SHARES
4.4k
VIEWS
Share on FacebookShare on TwitterShare on WhatsAppShare on Telegram

It is no longer a news that Olubadan of Ibadanland, Oba Saliu Adetunji on Sunday January 2 passed on at the University College Hospital (UCH) in Ibadan, Oyo State.

It is however necessary to know who is the next candidate to Olubadan stool who would be crowned the 42nd Olubadan of Ibadan following the death of Oba Adetunji.

It has been gathered that the Otun Olubadan of Ibadan land, Senator Lekan Balogun, is the nearest in line as the Olubadan of Ibadan following the demise of Oba Saliu Adetunji according to the laid down hierarchy of ascension the Ibadan throne.

Unlike other towns in Yorubaland, Ibadan city is unique in royalty and selection of her monarch.

The hierarchical arrangement in the Ibadan system has a two-line approach, the Balogun system, and the Olubadan (Otun) system.

Based on a rotational basis, Olubadans are chosen from either Egbe Agba or Egbe Balogun, to occupy the stool on the death of a monarch.

Recall, Late Oba Adetunji was formerly the Balogun of Ibadan land before his coronation, which indicates that the Otun Olubadan, Senator Lekan Balogun may be next in line according to the rotational system.

With the above analysis, it is inferred that Senator Moshood Olalekan Balogun (Ph.D.) from Ali-Iwo compound, who holds a Doctorate, Master’s and Bachelor’s degrees in Public Administration; Public & Social Administration and Economics from Columbus International University, Brunel University, and Manchester University is the next Olubadan of Ibadan land.

Below is the hierarchical list of all candidates in line to Olubadan stool...