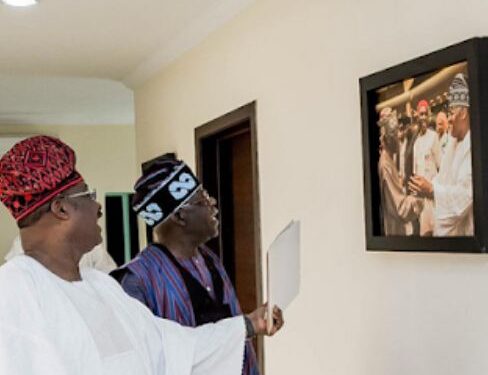 The Federal Commissioner at the Federal Character Commission, Abuja from Oyo State, Professor Adeniyi Olowofela has joined other eminent Nigerians to felicitate the National leader of All Progressive Congress (APC) Asiwaju Bola Ahmed Tinubu on his 70th birthday.

In a statement personally signed by him on Tuesday, the former commissioner for education and Ido Council chairman on behalf of late former Governor of Oyo State, Senator Abiola Ajimobi wished the former Lagos State Governor well especially over his presidential ambition.

Read details in statement below;

Happy birthday to the Leader of Leaders, Jagaban of Africa and Asiwaju of Nigeria.

On behalf of the Abiola Ajimobi family and his Political Associates , I wish to felicitate with His Excellency, Senator Bola Ahmed Tinubu on his birthday today.

“If Tinubu calls me once, I answer him thrice:- Sen Abiola Ajimobi.

On this day, we the Associates of Sen Abiola Ajimobi congratulates the Leader of APC an Incontestable Leader.

Former Governor of Oyo-State, Senator Abiola Ajimobi, once confided in me that if Tinubu calls him once he will answer with Sir, Sir, Sir. He said the reason why he answers him thrice is for him to know that answering him with sir wasn’t a mistake in the first place.
Oga like I foundly call him said he knew someone would have told Tinubu that he is ‘Sturbon and arrogant” but for him to know that his response was not a mistake hence why he answers him with sir, sir, sir.

He told me Tinubu is not only his leader but he earns the Leadership.

I know if our Leader, Ajimobi were to be alive today, there is no doubt he would have been a frontliner championing the Ambition of Senator Bola Ahmed Tinubu to become the President.

Providence has position you to be the Leader of Leaders in Nigeria and you are now the issue in Nigerian politics.

Hated and Loved with great passion in Nigeria, but Tinubu is not ignorable.

I have no doubt in my mind that you are a destiny Changer.

Happy birthday to you Sir, The jagaban of Africa, Asiwaju of Nigeria.

Nigeria on a slow journey to VENEZUELA| By Anonymous

Learn one vocation or the other if you are planning to relocate abroad, Nigerian youths advised

Learn one vocation or the other if you are planning to relocate abroad, Nigerian youths advised