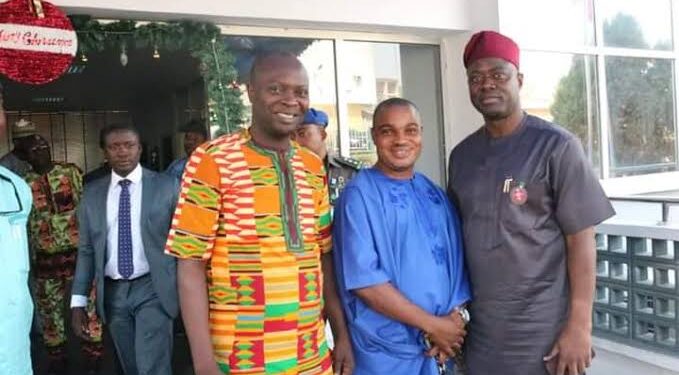 The Oyo State Council of the Nigeria Union of Journalists (NUJ), will on Monday, November 29, honour the governor of Oyo State, Engr. Seyi Makinde with the award of Best Media-Friendly Governor as this year’s press week of the Union gets underway.

A statement jointly issued by the chairman of the Oyo State council of the union, Comrade Ademola Babalola, the press week committee chairman, Joseph Okwuofu and the secretary, Jeremiah Oke said the award and the opening ceremony where the governor would declare the week open would take place at the NUJ press centre, Iyaganku, Ibadan, on Monday November 29 at 12pm prompt.

The NUJ President, Chief Chris Isiguzo will be the Chief Host at the epoch ceremony, while the Ooni of Ife, Oba Adeyeye Enitan Ogunwusi, Ojaja II will be the Royal Father alongside the Chairman, Ilaji Hotel and Sports Resorts, Chief Dotun Sanusi as the Chairman of the occasion.

The statement further revealed that a former governor of Ogun State, Senator Ibikunke Amosun, will be celebrated for his numerous contributions to human and national development, especially in the area of grass root mobilisation and bridge building efforts between the South and the North of the country, on Tuesday, November 29th at the same venue.

The NUJ described Makinde as a trail blazer who built an ultra-modern laboratory for Pen Group of Schools, Iyaganku; provided the Atiba FM in Oyo with about N150million recently; released multimillion naira grants to the Broadcasting Corporation of Oyo State (BCOS); established Alore Radio in the State Information Ministry; improved welfare packages for journalists in the state government establishment and regular supports to Oyo NUJ, an unprecedented one in the annals of history of the union.

According to Babalola, “Makinde, since the assumption of current NUJ executives in the state, has gifted the Union a brand new bus; sponsored year 2020 press week; appointed NUJ members into the cabinet; bankrolled the participation of delegates to the recently concluded 7th Triennial Delegates Conference in Umuahia, Abia State, provided it with one of the best supports by any governor in the country.”

The statement further stated that the 2021 press week will kick off at the family church of a governorship aspirant of the APC in Oyo State, Engr. Joseph Tegbe, on Sunday 28th of November, while the programme ends on Friday, December 3rd, 2021 with Awards Night for a number of distinguished Nigerians who have been supporting the Union and making the society a better place for all.