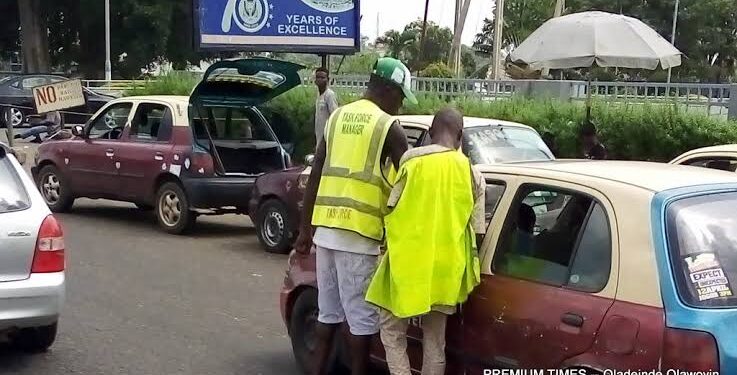 Revenue collectors suspected to be from the Oyo State Park Management System have beaten a motorcyclist to death over non-purchase of N100 daily ticket.

The incident, which took place at Queen Cinema area, Dugbe, Ibadan at around 11 am on Wednesday, saw other motorcyclists descend on the revenue collectors and gave one of them injuries on one of his eyes.

Trouble was said to have started when one of the revenue collectors flagged down the motorcyclist along the ever-busy Mokola-Dugbe road and asked him to purchase the N100 daily ticket.

The motorcyclist, whose identity is yet to be known, refused to purchase the ticket with the excuse that he did not have N100 to part with.

On noticing the incident, other motorcyclists within the vicinity descended on the revenue collectors, beating them until one of them had injuries on one of his eyes.

Speaking an eyewitness who simply identified himself as Oluwaseun said the revenue collector may have used a charmed ring to punch the motorcyclist.

“I was going home when I noticed two guys that were fighting. One hit the other one. The one that retaliated, they said that he wore this ‘oruka’, a charmed ring. Immediately he retaliated, the other guy went down on the spot and that was how the fight escalated.

“The okada guy that fainted, even at this point, we don’t know if he is still alive. He was rushed to the nearby Queens Hospital and the hospital rejected him probably because it is not the kind of issue they attend to.

“They were three guys (revenue collectors) and they were badly beaten by the okada guys and that is because the okada guys were fighting for one of their own and even as I speak, it is not likely that the guy is still alive because some were saying that his body was already getting cold,” said Oluwaseun.

It took the intervention of a team of patrol policemen from Mokola Division to avert further bloodletting. The policemen were said to have whisked the revenue collectors away and carried the motorcyclist from the hospital.

Lamenting the incessant harassment of motorists by revenue collectors in the state, Oluwaseun said, “The government should do something about all these Revenue collectors wahala. What is the essence of all these ticketings that they force okada people to pay at almost every junction? It should be more structured and organised so that issues like this will be reduced to the barest minimum.”

He was handed over to policemen from the Special Response Squad of the Oyo State Police Command who had arrived at the scene in connection with the fight between revenue collectors and an okada man.

Gone are the days when women are kept in the kitchen, says Chief Anagolu of Easy Way

Gone are the days when women are kept in the kitchen, says Chief Anagolu of Easy Way