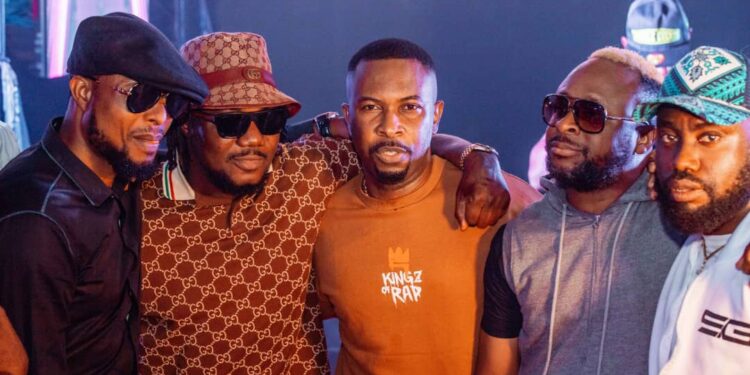 The 2nd edition of Ruggedmans much talked about “Foundation Concert” that he uses to celebrate entertainers who laid the foundation for Nigerian contemporary music from his era and also honour great Nigerians outside the entertainment industry finally took place last Sunday, 5th of December 2021 at BLVD Lagos.

He said he hopes a major sponsor comes in to support because he is bent on having the event annually.

Others at the event were comedians Efewarriboy and Memorycard who cracked the audience up with their jokes.

Some young artists who had the privilege of performing alongside these Nigerian musical greats were Specikinging, Leenamartinz, Lopo, Uch’barz, Bobbi Phillie, Ani D’Blessed and YNK.

Just like in the 1st edition, Ruggedman picked out 2 great Nigerians outside the entertainment industry to recognise and honour them.

They are the late Dr Stella Ameyo Adadevoh who gave her life in 2014 to stop the spread of Ebola in Nigeria and our great striker, the late Rashidi Yekini.

Things got a bit emotional when the Sound Sultan tribute came up and a video of Mr Emmanuel Ugolee, a close friend of the late musician and the industry was played. He talked a bit about the super talented artist then the great dance group “Dims Academy” gave a dance tribute to wrap that up.

We hear #Thefoundationconcert3 is already in the works and will be bigger and better.

While we wait for it, we will keep basking in the euphoria of the just concluded #Thefoundationconcert2.

See other pictures below;

Femi Fani-Kayode is suffering from erectile dysfunction, a reason I didn’t have sex for 6 years – Precious Chikwendu, his ex-wife tells court