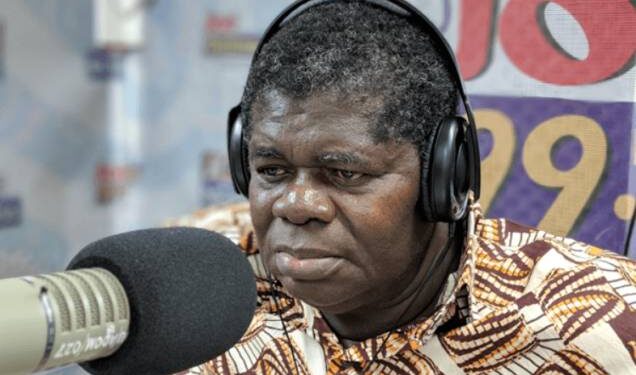 Actor Psalm Adjeteyfio has passed away.

According to the family of the actor, he died on the morning of Friday, April 8, 2022.

They revealed that his son found him lying unconscious in his room. After attempts to resuscitate him failed, he was sent to the hospital for emergency attention.

However, he was pronounced dead on arrival. The body of the actor has since been transferred to the mortuary.

Psalm Adjeteyfio, also known as T.T, died at the age of 74.

He was a veteran Ghanaian actor best known for his role as the lead character in the Ghanaian TV series, Taxi Driver.

TT also featured in other films including Love, Lies and Murder, Papa Lasisi, American Boy, The Scent of Danger and The Chosen one.

Earlier, the actor had disclosed in various interviews that he has been diagnosed with a heart condition and kidney failure.

In 2018, there was fundraising to accumulate money for his heart expansion treatment.

This was followed by a viral appeal in 2021 for ¢3,000 to enable him to pay his rent or risk being evicted.

TT, as he is popularly called, revealed that after years of acting, he had nothing to show and now survives on the benevolence of others.

He stated that he had spent GH¢6,000 on hospital bills and medication, adding that the assistance from family and friends had dwindled due to the Covid-19 pandemic.

The actor, again disclosed that he has become a charity case and will be evicted soon if help does not locate him.
Following his appeal, the Vice President, Dr. Mahamudu Bawumia, Chief of Staff, Frema Osei Opare and other personalities offered support.

A post made by Krobea Kwabena Asante on Facebook revealed that the spokesperson of the Vice President, Dr Gideon Boako, paid a visit to the presenter who interviewed Mr Adjeteyfio to donate GH¢50,000 to the actor. This was followed by a donation of GH¢40,000 from the Chief of Staff.

Again, Greater Accra Regional Minister, Henry Quartey, also committed a monthly ¢1,500 out of his parliamentary salary to ensure his well-being.

Months later ‘T. T.’ was back with another plea.
According to him, he had invested the funds that were accrued from these donations, hence his current state.

He further explained that all other potential donors backed off upon hearing the announcement of the Vice President’s gesture.

This got him facing the wrath of Ghanaians.

But taking his turn on Joy Prime’s Changes, in January, the ‘Taxi Driver’ said he is not perturbed by the development because he knows how grave his situation is.