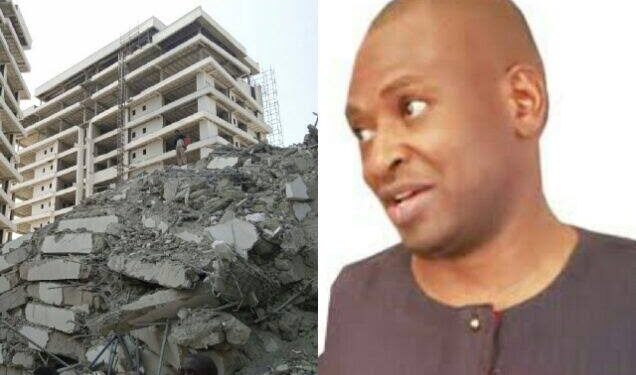 Residents of Gerard road, Ikoyi, Lagos are currently battling with odour, rat infestation and other health concerns following the rescue operations that succeeded the collapse of 21-storey building in the area.

The Head of Department, Environmental Services in Ikoyi Obalende LCDA, Akingbehin Samuel and the Council manager, Oloto Lateef were at the accident scene to oversee fumigation of the area on Wednesday. The government officials spoke during an interview with TVC News.

Remember that a 21-storey building owned by Fourscore Homes Limited collapsed in the Ikoyi area of Lagos State. The incident had led to the loss of several lives, including that of the owner, Femi Osibona.

However, residents in the area have reported the stench that emanates from the collapse site.

Speaking about the exercise, Akingbehin Samuel (HOD Environmental Services) said,“This exercise is about fumigation, decontamination, and disinfection of the site of the 21-storey building collapse. The LG deemed it necessary to control pest infestation in this environment, which would have indirectly affected residents in the area. There have been complaints of odour and rats infestation. Perhaps, there are decomposing remnants that could be causing the smell and attracting the rats.”

“The corpses that got trapped in the building could not have been entirely evacuated. There would be bodies around the rubbles, and we need to decontaminate the site to avoid causing an epidemic.”

VIDEO: Sylvester Omoroni agreed to join cultist gang, before he was beaten as rite for initiation – Kemi Olunloyo

VIDEO: Sylvester Omoroni agreed to join cultist gang, before he was beaten as rite for initiation - Kemi Olunloyo