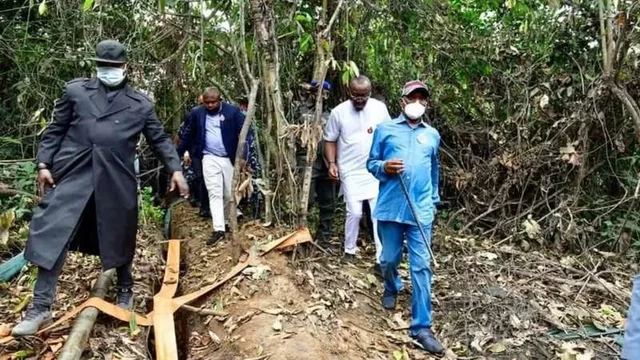 The Ogun state police command has warned residents to desist from jungle justice and that such an act is unlawful and won’ t be tolerated again.

This warning is coming in after some set of angry people enters Oja Odan divisional headquarters to kill suspects who were allegedly caught with a fresh human head.

Police said they allegedly find a fresh human head with the suspects, they took them to the station for interrogation. But the angry youths were not satisfied that the suspects are in police custody and they Storm the station to beat up the suspects to death and burn them immediately.

” When we were interrogating the suspects, some people mobilize a large number of people to invade the station and overpower the police that was on duty. They beat the suspects to death and their corpses” , Ogun State Police Command said in a statement by the spokesperson, Abimbola Oyeyemi said.

The police said people should stop taking laws into their hands and warn that they will start dealing with anyone who continues with this act.

According to the police, suspects are still suspects until they are convicted by the court, n matter how serious the crime that was allegedly committed by that person.

Police said the court has the power to punish anybody that is found guilty of any crime.

The commissioner of Police, Landed Bankole has ordered an investigation into the killing of the suspects and he promises to ensure that justice is served.

This is not the first time that police will be arresting people that were allegedly caught with human parts.

The Ogun State Police Command in a statement on Saturday, 12 2022 said they arrested one couple after the traditional rulers of Leme Community, the community where they reside, Chief Moshood Ogunwolu alerted police after one of their co- tenant complain that he was perceiving bad odor from their room.

As they got the information, the DPO of Kemta Division, CSP Adeniyi Adekunls, and other detectives search the room and discover one plastic bucket containing fresh human parts.

According to the statement, the couple allegedly confesses that they are herbalists and the body parts were given to them by one Micheal including hands, breast, and other body parts.

Another case is one of three young boys that were arrested by Ogun State Police Command after they allegedly kill the girlfriend of their friend for a money ritual.

The police command later arrests the boyfriend and all of them are currently in police custody.

Before the police arrested the fourth suspect, the three suspects confessed that what they were burning in a local pot is the head of the girlfriend of their friend that escape earlier.

The police claim that the boys confess that the boyfriend deceives the girl that is identified as Rofiat to where the four of them will kill her. After that, they cut off her head and pack her remains in a sack, and dump it in one old building.

The House of Representatives of Nigeria has told the federal government to declare a national emergency on ritual killings in the country.

The directive to the federal government also supports the resolution of the national assembly during their sitting on Wednesday.

They reach the resolution after one Lawmaker, Toby Okechukwu presents the motion ” on need t stop the rising trend of ritual Killings in Nigeria” .

Okechukwu who is the deputy minority leader of the House that the problem of ritual Killing has taken a very dangerous dimension.

What Is Ritual Killing

Official statistics in Nigeria show that cases of ritual Killing have increased in the number of missing persons all over the country in recent times. Police are looking for some, while for others the search will be too late.

Speculation states that the majority of people who disappear without a trace are often victims of ritual Killings, while suspects will abduct victims to collect their body parts for rituals to make money, charms, or even portions.

Oftentimes, these parts are required by herbalists to make sacrifices that will give them power, wealth, or even cure illness. But it’ s not easy to prove that such sacrifices can give someone money or protection.

police and other fraud agencies like Nigeria Economic and Financial Crime Commission have increased their work to go after people, mostly young boys who are into the activity.