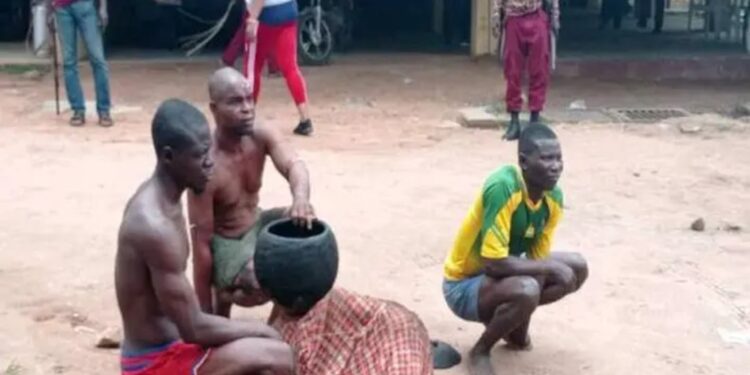 Some yet-to-be identified ritualists on Saturday allegedly cut off a 94-year-old woman’s head in her house at Ikun-Ekiti, Moba Local Government Area of Ekiti State

The News Agency of Nigeria (NAN) reports that the body of the old woman, Mrs Ayodele Asaolu, was found in her house on Saturday evening without her head.

The Police Public Relations Officer (PPRO) in Ekiti, ASP Sunday Abutu, when contacted on Sunday on the incident promised to get back to newsmen on the incident.

Abutu however, confirmed the incident to NAN on Tuesday, saying that officers of the Command had begun investigating the incident.

The PPRO said the case was reported by one of the children of the deceased who was contacted by neigbours after the corpse was found in the house.

NAN learnt that the woman was living alone in the house where the incident occurred.

Some indigenes and residents of the community who spoke with NAN correspondent on condition of anonymity said that they suspected some ritualists to have killed the old woman.

They added that the ritualists must have observed that the woman was living alone in her house before they attacked and killed her for alleged money ritual.

“We were not aware of any movement around her house, she stays alone in her house and we believe it is the ritualists that killed and cut off her head for money rituals.

“We are appealing to the police to assist us to arrest them because if such an ugly incident can happen in our community, nobody is safe,” the residents said.