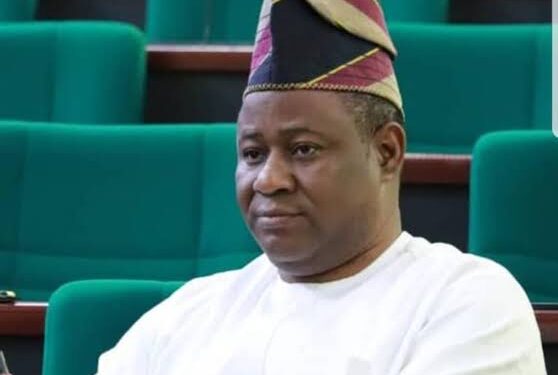 The leader of All Progressives Congress (APC) caucus at the House of Reps, Hon Segun Dokun Odebunmi has advised stakeholders in the party against fanning ember of division among party members

Odebunmi, representing Ogo- Oluwa/ Surulere Federal Constituency said the return of Omodewu and Innauguration of party execo is in order and should be supported by those who are genuinely interested in the progress of the party

Recall that Senator Ayoade Adeseun, a former House of Reps and Senator who spoke on behalf of APC stakeholders recently described the return of Omodewu and Innauguration of excos as the climax of a reign of impunity which a tiny and minority section of the party in Oyo State in collaboration with outside forces had sought to impose on the party ahead of the 2023 general elections.

Odebunmi, noted that such statement should not be emanating from any genuine leader of the party if trully they want the party to progress.

” Everything has been resolved ,there is no crisis in the party, the leadership of the party are already making serious move to reconcile all stakeholders so that we can have a united APC in Oyo, so there is no cause for alarm,

“It is quite sad that Senator Adeseun will be among those championing issues against the party, most especially when all Son and Daughters of Ogbomoso land are mourning and yet to be buried political Leader Otunba Adebayo Alao Akala

” I am always baffles that a personality of Sen Adeseun would always be caught in the web of antagonising the choice of the people like he did in the Peoples Democratic party untill he lost the battle against Seyi Makinde at the supreme court.

” Adeseun is a confusionist who is seeking political relevance.
We left PDP for him and moved to APC he failed fo utilize the structure and later joined us in APC in 2019 after he had lost in the PDP and rather than working for the progress of the party he is still in the opposing side with the intention of distabilizing the status quo

Sen Adeseun is from my constituency and he worked against me in 2015 and 2019. I defeated him, I want to urge the leadership of APC to ignore him he is only looking for political relevance as they used to do in PDP where Monkey they work Bomboo they eat.

“If you check his political history, you will know that he has never stay in a political party for 2 dispensation consecutively, he would have gone back to PDP but because he has fought the party up to the supreme court level he has no other party to go than to stay in APC but as a critical stakeholder I want to urge him to abide by the constitution of the party and be concerned with the progress of the party.” odebunmi concluded

International passports: issues with backlog'll be over soon - NIS