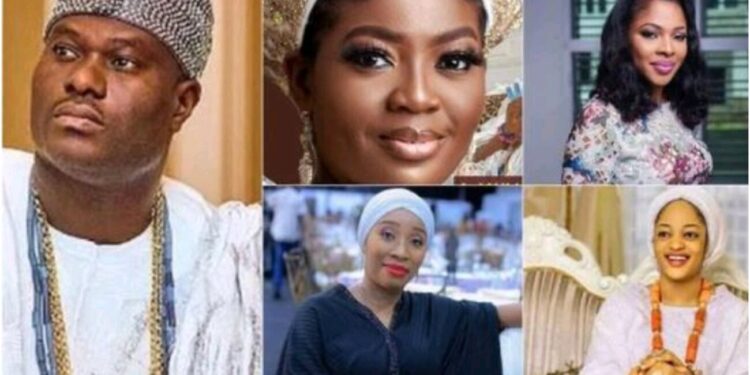 601
SHARES
1.4k
VIEWS
Share on FacebookShare on TwitterShare on WhatsAppShare on Telegram

Instagram blogger Wotzup.ng has alleged that there is trouble in the palace of Ooni of Ife, Oba Adeyeye Enitan Ogunwusi over the consistent public appearance of Olori Naomi.

Naomi, who seemed to be the youngest wife of the monarch, often attends public events with the Ooni, and his son is considered the only royal son, but Wotzup.ng has alleged the king has another son.

According to the blogger, other place queens are fighting to be seen and known by the public, just like Olori Naomi and her son.

The post reads: Hello tueh tueh, our old gist. it’s all over the place now, Na fresh gist from oven we Dey chop now, be like all the other Queens don change am for Naomi, they want to be seen too, who remember this gist?

Wey I talk say one of them born sef but them tell the Queen not to make her royal pikin public except Queen Naomi pikin alone , things Dey occur for all these royal house oo, I come in peace oooo, igi ewedu oni fo wa Lori oooo.

Wotzup.ng recalls even though Oloori Naomi is recognized as the first Queen in the palace, she and her family members who live with her know categorically that the latest Queen Ashley cannot be toyed with.

Journalist Kemi Ashefon reports that they all know Ashley is a no-go area and the Ooni doesn’t tolerate any form of disrespect towards his beautiful Ashley.

Well, Ashley was unveiled as the latest queen during the 47th birthday of the Ooni in October 2021. Even Oloori Naomi acknowledged the presence of some queens in the palace while giving her vote of thanks at the surprise party organised for the king.

She referred to Ashley as the Princess of the Source and prayed for more queens in the palace.

Not a few followers of the Ooni on social were surprised when Oloori Ashley referred to the monarch as ‘my crown” in her birthday shout-out.

VIDEO: Watch as passengers fan themselves on Abuja-Lagos flight