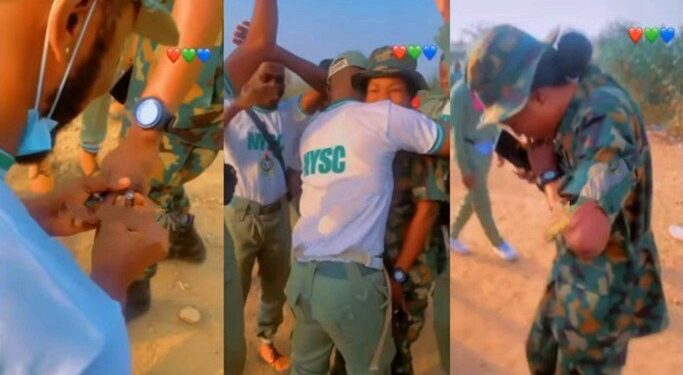 475
SHARES
1.1k
VIEWS
Share on FacebookShare on TwitterShare on WhatsAppShare on Telegram

A male National Youth Corps member has proposed to a female military officer at the NYSC orientation camp in Kwara state.

In a video which has gone viral, the corper could be seen going on his knees to ask for the soldier’s hand in marriage.

She accepted his proposal and he put a ring in her finger and they sealed the engagement with a hug.

The lady was evidently shy as she covered her face while being cheered by other corp members.

See some reactions below..

oluwatobilobalayelorun; He want to bamba, he want to chill with the big gurls.. zazzuu zeh

sir_eltee; This guy don utilize the 3 weeks well. I used my own hiding, so I won’t participate in activities and eating plenty food Congratulations to them.

mara_jenevie; How they want take do am now

papizzy_dxp; The girl go too beat am