VIDEO: Man commits suicide, jumped down a bridge into lagoon, family searching for his dead body 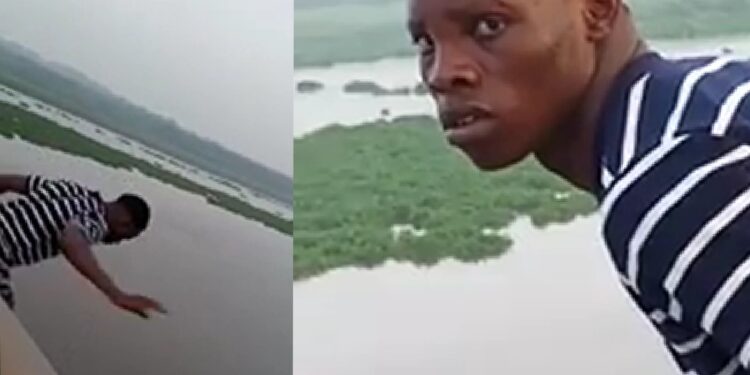 813
SHARES
1.9k
VIEWS
Share on FacebookShare on TwitterShare on WhatsAppShare on Telegram

A National Diploma certificate holder, identified as Lekan Odunare, has reportedly jumped into the Lagos Lagoon in an attempt to commit suicide. It was learnt that the victim, whose body had yet to be recovered, jumped into the lagoon in the Epe area around 10am on Tuesday.

In a video circulating on social media, Lekan could be seen sitting on the rails of a bridge before plunging into the waters.Before he dived in, a man filming the scene was heard querying his intention.Lekan, who looked distressed, did not answer any of the questions before jumping into the lagoon.Many social media users, however, wondered why the man behind the camera made no effort to save him.A source, who claimed to know the victim said his remains had yet to be found.

He said, “The boy is like a younger brother to me. I saw the news first on Facebook and I called his elder brother to ask if it was true and he said yes. When I asked if they had found the body, he said they had not found it but that the people that were around the area said he died after jumping into the lagoon.“I can’t say why he jumped into the lagoon; probably he was depressed or something. He has finished his national diploma and was learning surveying; I don’t know why he would jump into the lagoon.

The deceased’s brother, Usman, said he never opened up about anything bothering him.He said, “I don’t even understand the situation. He just wished to do that to himself. He used to be depressed once in a while, but at least he should have come out and spoken to someone. If there was anything bothering him, he should have talked but that was how he chose to live his life. It has not been easy for our mother, but she will get over it as time goes on.

We have not seen his body; we are searching for his body and hoping he will float to the shore because the lagoon is deep and nobody can enter into it.”He also said the family did not report the matter to the police.The Public Relations Officer of the Lagos State Emergency Management Agency, Nosa Okubor, said the agency did not receive any report about the incident.

The state Police Public Relations Officer, Adekunle Ajisebutu, promised to find out.He had yet to do so as of the time of filing this report.The General Manager of the Lagos State Waterways Authority, Oluwadamilola Emmanuel, said the agency had no information on the matter.