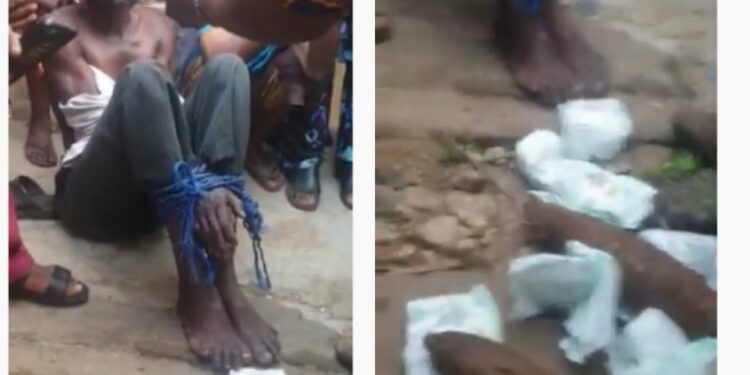 A middle-aged man suspected to be a ritualist has been set ablaze in Ibadan, the Oyo state capital.

It was gathered that the suspect, whose name could not be ascertained, was killed and set ablaze on Friday morning.

He was arrested by the angry residents of Ashi, Bodija, and Akobo for allegedly turning two students of Bashorun Ojoo High School into tubers of yam.

The incident occurred at the front of the school.

Sources said that the man was arrested when it was discovered that he turned the students into tubers of yam.

All efforts made by the residents to prevail on him to turn them back proved to be abortive.

The man, according to sources who asked not to be named, was tied with ropes and interrogated.

His inability to provide concrete answers made the angry residents set him ablaze.

The remains of the suspect were later dumped at the front of the school fence.

Our correspondent, who visited the school a few minutes after the incident, observed that the remains of the suspect are still lying on the same spot.

In a video obtained by DAILY POST, the man was tied with roped with two tubers of yam placed before him. It was however unclear if he actually turned the students into the tubers as teachers at the school refused to comment on the incident.

None of the residents in the area was also ready to speak when our correspondent visited the area.

All efforts made by DAILY POST to get a reaction from the Public Relations Officer of the state police command, Adewale Osifeso, also proved abortive as several calls put through his mobile phone were not answered.