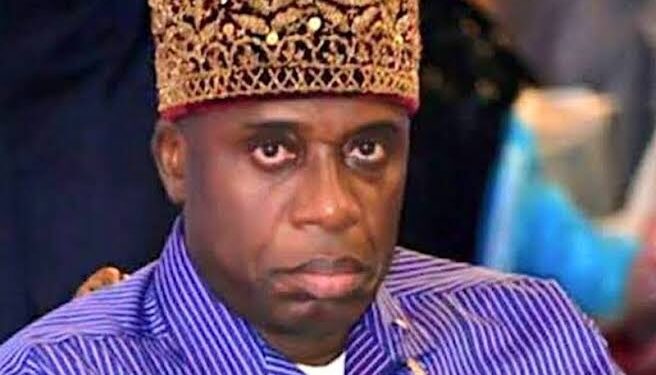 The Senate and House of Representatives Joint Committees on Land and Marine Transport on Thursday protested against the proposal of the Minister of Transport, Chibuike Ameachi, to construct a standard gauge for the Kano-Maradi rail line while an old narrow gauge was planned for other parts of Nigeria.

The Chairman of Senate Committee on Marine Transport, Senator Danjuma Goje, and House Committee Chairman, Mr Pat Asadu, kicked against the marginalisation of other regions of the country in the rail line construction. Both Chairmen queried the minister why he was not constructing uniform rail lines across the country.

The Chairman, Committee on Port, Pat Asadu, who opened the floor after the minister presented the budget to the committee, specifically asked why he was constructing modern rail line in one place and old rail lines in other parts of the country.

“Looking at your key railway projects which you’ve highlighted, I think they are worth the spend:

“We are now looking at the difference between project D which is the construction of 284 kilometers Nigeria-Maradi railway standard world class line against Project C where you talked about the total rehabilitation and reconstruction of Port Harcourt to Maiduguri eastern rail network defined as narrow gauge.

“For a segment of this country that is known for trade and commerce, they need railway as they need air.

“Why is the ministry doing a 287 kilometers of railway track from Kano to Maradi that you will fund with Nigerian money borrowed for Nigerians to be paid by our children to do a world class railway to Maradi.

“I also know the economy of Niger Republic and I believe the economy of the South-East is bigger than that of Maradi. I am not even talking of South-South.

“So what policy guide, what need assessment, what study of federal character integration would make the Ministry of Transportation to put 284 kilometers railway from the end of the North to Maradi and then constructing a narrow gauge in the South-East and South-South.

“This to me is why the integration of this country will always be challenged because things are done with so much impunity. This is our commonwealth.

“So if we approve this budget for you, you will go and do Kano-Maradi standard rail line and do a narrow gauge rehabilitation for the South-East. My heart bleeds.

“Instead of doing the right thing, you are now giving us this one as what will enhance the economy of Niger and Nigeria, while the economy of Nigerians especially those who have the containers and who are always on the road are given a narrow gauge rehabilitation.”
Someone needs to explain why Nigerians should pay to construct rail lines to Niger Republic.