VIDEO: Singer Portable abandoned me after I got pregnant for him, lady exposes ‘Zuzu’ crooner 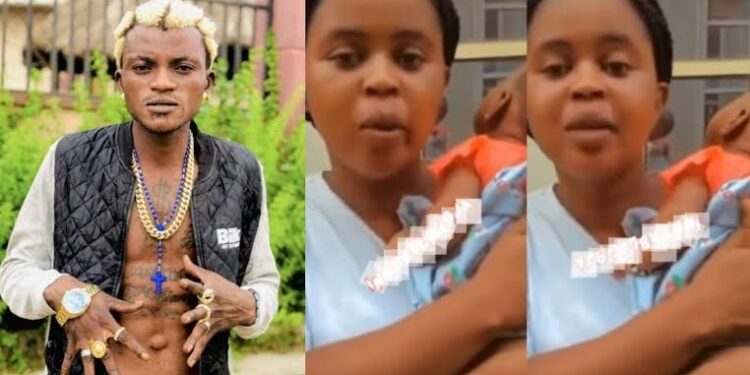 A Nigerian lady, who identified herself as Abike, has alleged that she was abandoned by singer Portable after getting pregnant for him.

In a video going viral on social media, the lady said she met Portable at a nightclub last year.

According to her, “My name is Abike. I and Portable met at a nightclub last year and I spent the night with him as an Olosho(hooker). At the end of it all, I got pregnant for him.

The lady who, in the video, held the baby she allegedly had for Portable, said she recently heard that the singer had become a celebrity.

This is as she lamented that he has been ignoring her and the baby since he found fame.

“Portable has stopped picking my calls and has not sent money for the baby’s upkeep.
“Please, Nigerians should have pity on me and help me share this video,” she said.

He was recently involved in a controversy after singer Wizkid sprayed $3,000 on him while he was dancing on stage.

Portable would go on to make a video alleging that he only got $600 from the money which he said was gathered from the stage by Poco Lee.

The buzz his allegation generated created a fallout between him and his promoter, Kogbagidi, before they finally reconciled.