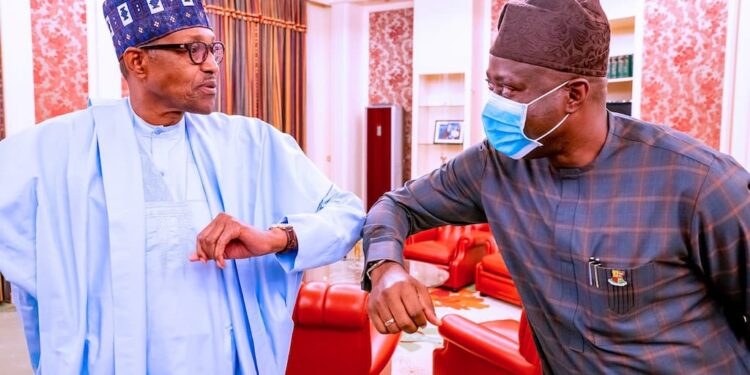 Buhari said two Governors had visited him in Aso Rock, over the clashes, but he had advised to address the break down in communication between the local leadership and the herders which had disrupted peaceful coexistence between the farmers and herders.

Governor Dapo Abiodun also visited Buhari in February over the clashes in Yewaland.

It was during the ethnic clashes in Ibarapaland, the self acclaimed Yoruba activist, Sunday Igboho had stormed the Igangan residence of the Seriki Fulani, Saliu Abdul-Kadri, saying the Yorubas could no more bear being killed in their land.

AbdulKadir was later evicted with his settlement set ablaze by some locals believed to be loyal to Igboho.

The crisis also threw up argument for and against the need to establish state police.

Amid rising tension in the region, Makinde had visited Buhari to seek his support to nip the crisis in the bud.

In an exclusive interview with Channels Television, Buhari noted that herders and farmers have been co-existing in Nigeria for generations, but wondered what went wrong.

The President also said traditional rulers must play a huge role in bringing peace to communities.

He also advocated for more dialogue in solving the farmer-herder clashes recorded across the country.

“For example, there were two Governors that came to see me about problems – Oyo state and one other state – because the herders were in their forests but the animals were going into the neighbouring farms, and eating the crops; I said, as far as I know, the farmers and herders have been co-existing in Nigeria for generations. Let them go and ask the local leadership what has gone wrong, why the break in communication between the local leadership and the herders,” he said.

On the role of the monarchs, he said “The role of traditional rulers must not be undermined, because in their areas they know who is who, even by families, not to even talk of individuals.

“So, we have to revert to that system for us to have effective security in the localities.”