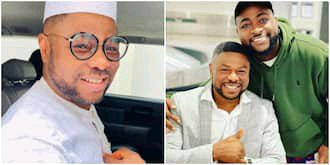 Popular gospel musician, Yinka Ayefele recently met Davido in Atlanta and he was full of praises for the young man.

The gospel artist also added that he loves Davido more for being different from other musicians he has met.

Popular gospel singer, Yinka Ayefele is another celebrity who has testified to Davido’s humility both home and abroad.

Ayefele met with Davido in Atlanta, USA and took to social media to share the photo they took together.

Different from them
Yinka Ayefele did not only post a photo with Davido but also wrote a caption full of praises for him.

Ayefele revealed that he did not see the Fem crooner, but they still met because Davido saw him from a distance and ran up to meet him.

He went on to praise Davido’s humility and added that he loves the singer more from that moment.

Ayefele also affirmed that Davido is different from other singers.

“Together in ATL. I admire your humbleness my brother, I didn’t see him but he saw me from a distance and ran down me. @davido I love you more today. You are different from them.”