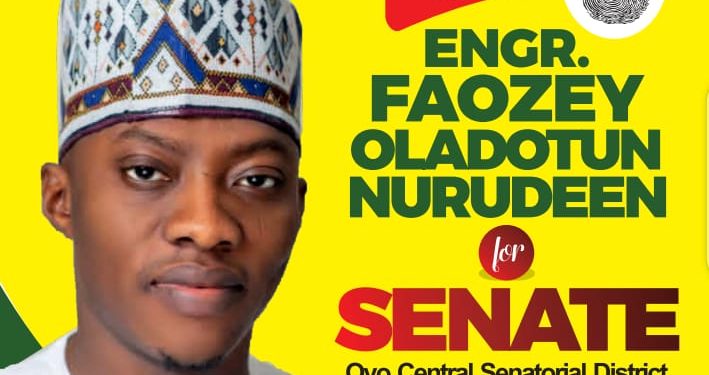 The accord Candidate for Oyo Central Senatorial District, Engr Faozey Oladotun Nurudeen has justified his preparedness for the red chamber of National Assembly based on his acquisition of competence, character and capacity.

Faozey Oladotun made this disclosure while meeting with the teeming supporters that spread across the eleven(11) local governments making Oyo Central Senatorial District.

Oyo-born Engineer and politician stressed that his possession of 3C of competence, character and capacity are prerequisites necessitating his ambition into red chamber of National Assembly.

The accord candidate maintained that, he understands competence for the legislative task as a quality needed in a candidate for efficiency of service delivery if elected.

He stressed that the main tasks of a law maker are technical and procedural assignments which require mastery and total understanding of engagement.

Adding that, character and capacity are also unavoidable qualities, which are to be found in a leader, politician and most especially, law makers.

Faozey Oladotun noted that, his youthful and energetic disposition to what the concept of legislation means, will no doubt trigger his notable performances if elected.

He enjoined constituents across the eleven local governments of Senatorial District to queue behind in order to attain victory at the poll.

He pledged to fulfill every promise made during the electioneering campaign with attraction of developmental projects and programmes to all the nooks and crannies of the senatorial district.