Drama as spirit of human corpse fights other corpses in Mortuary 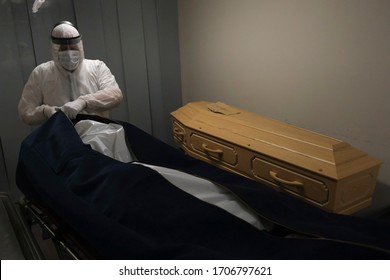 A man on Nairaland has posted a strange story of his uncle who died and his corpse deposited in a mortuary.

According to the Nairalander, the man died some days ago and he is billed to be buried in January to prepare for his burial ceremony, a reason his body was deposited in the mortuary.

In his tread on Nairaland, he said the spirit of the man has since been causing trouble. He described how his spirit scatter the corpses in the mortuary and even hanged some on the window.

The poster on Nairaland is therefore requesting for piece of advice from fellow Nairalanders.

Read his post below, titled: “My Uncle’s Corpse Fights Other Corpses In The Mortuary: What Should We Do?“

I lost my uncle some days ago and we put him into the mortuary. Our plan to buried him by january…

What brought about thread is that the mortuary attendant called us to take our corpse on the ground that he fight with the other corpse there.

We went there early morning yesterday to comfirm ourselves. What our eye see mouth no fit talk… E shock us.

He fought other corpse there. He even hang some on the window shocked Attendant don beat him tire, they will still wake up in the morning and see other corpse scatterd and only him enjoying the room. undecided

We where told maybe he’s a cultist or he’s in some spritual stuff before he died..

They ask us to take him away but we don’t want to bury him now due to some family issues. You know.

Please exprience nairalanders, what do you suggest to do now to him?